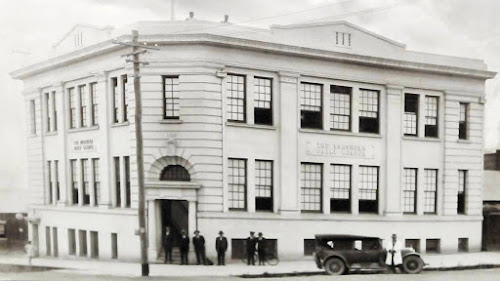 Read all about it: New Northern Daily Leader Building, 1925. The Leader became the Norths second great daily. As late as 1959, the Leader was still outselling the Sydney Morning Herald in Armidale.

To this point we have followed the growth of the newspaper press in Northern NSW, the broader New England. Over the next few columns we will follow the story across the twentieth century.
It’s a story of competition, but also cooperation. It’s a story of commercial challenge, of success. But it’s also a story of radical change and, in the end, decline and lost influence.
At federation in 1901, even small towns had at least one newspaper, many had two or even three, By 1950, consolidation had reduced the number of papers, but they remained locally or regionally owned.
As radio came during the 1930s, the new stations were again locally or regionally owned. As TV came to the North from 1962 with the establishment of Newcastle’s NBN, local or regional ownership continued.
This was a very different world.
In 1959 in Armidale, for example, the Armidale Express was the main source of local news, but many Armidale people also bought the Northern Daily Leader as the premier daily in inland New England providing news from across the North. The Sydney Morning Herald had increased its market share, but was still being outsold by the Leader.
Commercial radio coverage including news was dominated by the Tamworth based Broadcast Amalgamated controlled New England radio network (2TM, 2AD, 2VM, 2NZ and 2RE).
Newspapers, radio and then TV had a strong local and regional focus that extended beyond news coverage into the direct promotion of community activities that might benefit economic, social, cultural and community development while also serving commercial interests.
The media had become an integral part of community infrastructure, broadly defined.
By 2000, local or regional ownership had shrunk to a few independents. Ownership of the newspaper press across Northern NSW was split between two competing media groups, Rural Press and APN, with the Newcastle Herald owned by Fairfax. .
These ownership changes coincided with the rise of the use of the term masthead as substitute for newspaper and had a profound impact on newspaper performance.
The split between APN and Rural Press ownership of the Northern Rivers papers, together with a more localized paper focus, slowed and then effectively stopped the flow of information between coast and inland and indeed to a degree within the inland.
Newspaper concentration together with tensions between APN and Rural Press also greatly impeded the work of the Country Press Association, the industry’s main cooperative body.
In 1902, these developments lay far ahead. In my next column, I will at what we might think of as the golden age of the New England press.