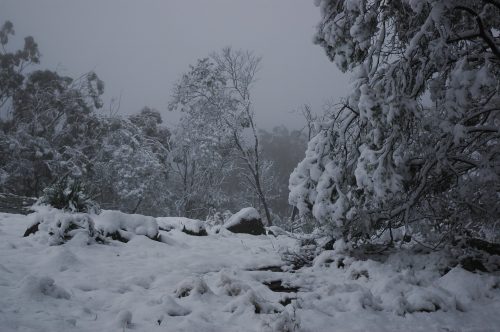 CHANGING WORLD: During the Last Glacial Maximum, the Tablelands' climate became sub-alpine, sub-glacial. Trees actually vanished in many cases, replaced by tundra. This is the sixth in a series discussing the deciphering of the mysteries of New England's Anaiwan or Nganjaywana Aboriginal language.

The theme of this year’s NAIDOC Week celebrations has been Our Languages Matter, celebrating the role that Aboriginal language plays in cultural identity.

At the Uralla parade, Anaiwan elder Les Townsend said that continuing the Anaiwan language was important to him. “We have a lot of words, but we haven’t got the complete language yet.”

Uralla Shire Council Mayor Pearce said the language was a connection to law, family, history, religion, childcare, health, caring for country and more. “Each language is associated with an area of land and has a deep spiritual significance.” (AE 5 July 2107)

Each Aboriginal group had its own language that linked with those around them like cells on a sheet of graph to form dialects and then bigger language groups. Each language covered the totality of human experience from the scared to the profane, from yarning around the camp fire to the language of love and relationship to that attached to the most important religious ceremonies.

Loss of language is a profound experience because it represents loss not just of language, but of the culture and tradition which that language expressed.

In this continuing series on the mystery of the Anaiwan or Nganjaywana language, I have tried to interest you in the story of one Aboriginal language, to bring one limited part of the past alive. I said in my last column that I would conclude the series by looking at the reasons why Anaiwan changed to the point that that many considered it to be a totally separate language.

The account that follows is necessarily speculative, open to challenge.

The first Aboriginal settlers reached the continent called Sahul perhaps 50,000 years ago. By 30,000 years, they had spread across the entire continent, although total population numbers may not have been high by later standards.

From perhaps 25,000 years ago, the local environment began to deteriorate becoming very dry and both intensely hot and intensely cold. This climatic regime peaked during what is called the Last Glacial Maximum, 21,000 to 15,000 years ago.

The Tablelands area that would become the territory of the Anaiwan became sub-alpine, sub-glacial, in spots. It seems almost certain that the human population would have had to retreat.

Quote
Loss of language is a profound experience because it represents loss not just of language, but of the culture and tradition which that language expressed.

Perfectly expressed Jim, I could feel the pain.

:) Thanks John. I always feel happy when I have managed to capture something properly!