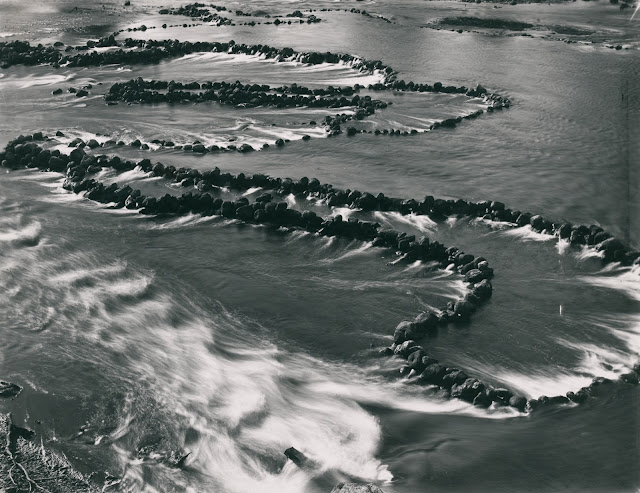 Practical: The heritage-listed Brewarrina fish traps are one of the largest surviving examples of Aboriginal engineering.This is the third in my new series on New England's built landscape and architecture
Previous post: New England: A journey through the built landscape
Next post: Building a country landscape

This column continues my exploration of ’s built landscape and associated architecture looking at housing, food production and communications in Aboriginal New England.

All architecture reflects culture, social structures, purpose and the environment including climate and available resources. The Aborigines were no different.

A seasonal people, they moved across the landscape in varying size groups in response to both the availability of food and water and social and ceremonial needs. In transit, they formed camps marked by multiple small fires rather than single big blazes, thus spreading the warmth more widely across the group..

These camps might but need not contain simple shelters to provide additional comfort. These might be no more than a few sheets of bark leaning on a pole fastened a few feet up the ground with a fire in front, sited so as to block wind.

Where people remained for longer periods, more substantial structures were constructed, forming something close to villages.

From the descriptions we have, the Tablelands’ semi-permanent shelters were simpler, reflecting lower populations, more limited resources and more frequent movement.

Those to the east and west were much more substantial. Some appeared designed to accommodate a family group, while other could accommodate up to fifteen people. The number of dwellings varied from as few as three up to perhaps twenty. .Depending on the size and number of buildings, the resident population would have been perhaps twenty to eighty.

Design was generally circular or semi-circular with a conical roof and an entrance designed to shield from the weather. Building materials appear to have varied, but in all cases the construction was watertight.

Observers were impressed. Writing of the two villages he observed on the Clarence in 1839 with canoes moored in a line in front, Captain Perry commented on the ways nets, baskets, water vessels and cooking utensils were “constructed with particular care and neatness.”

The Aborigines were sensible people. Just as they invested time in the construction of more permanent housing where that made sense, they also invested in the same way in communications and food production.

They created tracks especially in thick bush where that would save time, they created wells to provide water when traveling in drier country, and they invested in particular structures where that would aid food production. This included standing nets to aid in hunting and fish traps on the coast and in the west assist fishing.

While much of this has gone, the Brewarrina Fish Traps remain as an example of the scale of Aboriginal engineering.

Particular food sources were also planted adjacent to camp sites or other favourite spots by the women in the group to aid the gathering of specific foods. There is a nice illustrative paragraph or two in a review of Charles Massey's newly published book Call of the Reed Warbler.

"when his friend and Aboriginal Ngarigo elder Rod Mason came to visit he discovered that a lifetime of intimately knowing the birds, trees and animals of this land wasn’t significant at all. The kurrajong tree is probably a lot older than 400 years. Rod told him that when the old women walked their favourite songline tracks they carried seeds and roots of their favourite food and resource plants, and sowed and planted them at spirituality significant camping places. His homestead front garden was one such ceremony place – there would have been a grove planted, and the women had stripped the bark from the tree to make bags and material. This old tree represented a connection to country “deeper than we can imagine, and linking us indivisibly with the natural world”.
I have long argued Jim that females originated the plantings and 'gardens' that were the beginnings of agriculture.

Hi John. You may be last on the last. I have seen references before to that type of planting, but sans the reference to beliefs, more a form of agriculture. In Northern NSW, I know of no reference at all to songlines in all the ethnohistorical material until very recent adoption as part of current Aboriginal beliefs.

I didn't have a reference to hand Jim so chose to express it as a belief rather than an un-referenced 'fact'. I do remember attending lectures where botanists who have sampled known archeological camp sites have found recurring patterns of specimens for which the best explanation was that of deliberate plantings close to the campsite. You could imagine arriving late in the day at your next camp and looking for a quick feed before night sets in.

Hi John. There was a typo in my last comment. I meant that you may well be right, not last, on the last, the role of women. There are a number of references in the Australian ethnohistorical literature to deliberate planting.