This is the twelfth in my series on New England's built landscape and architecture.

Over the last eleven columns I have explored ’s built landscape and architecture. There is more to say. However, last week I was back in the North after a longish break. This caused me to reflect on aspects of the present and its links to our shared past. 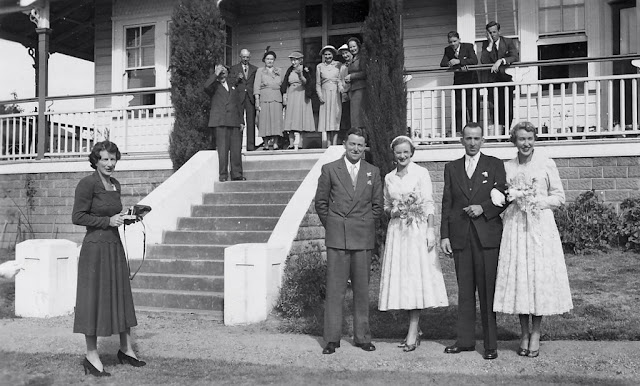 Shared past: A 1955 Drummond family wedding, this Armidale Federation style house is a rare example of the form expressed in weatherboard.

This is a photo of a Drummond family wedding from 1955. To family members, it is a story in itself, a reminder of our shared past.

Three of the four Drummond girls are at the front. Edna, the oldest, was ill in hospital. David Drummond stands on the steps to the left. His wife is on the verandah with members of the groom’s family.

At a second level, the photo is something of a period piece, an example of an important ceremonial occasion. While most major Armidale Federation style houses are brick, this house is a rare example of the form expressed in weatherboard.

As with so many of the larger South Hill houses built in the second half of the nineteenth century, the front of the house with its steps and high verandahs faces south, looking out over the back gardens and tennis court to the city beyond. The street entrance in is at the back of the house.

As a regional historian, I see part of my role as interesting and involving those living in with their own past. We necessarily live in the present, concerned with problems of work, life, careers, family, school and studies.

One side effect is that our past slips away, especially for new people who do not have a direct lineal connection with that past. The stories that link the present and past are forgotten. Local and regional historians try to redress this.

But I also see part of my role as making history interesting and accessible to those outside the North who may have no connection with the area. I believe that out stories are relevant to the broader sweep of Australian history and indeed beyond.

There are practical economic reasons for doing this beyond the questions of interest and relevance in the history itself. Our history draws people to the North and could draw more if it were better known.

Not all visitors are interested in history. Some do come just for the history, including the built landscape and architecture. More come for other reasons, but then sample the history while here.

The more stories we have, the better we tell them, the greater the visitor experience. Our history should be seen as it is, a resource to develop and manage to attract and enrich.

In my humble opinion beautifully written Jim.
Quote
“As a regional historian, I see part of my role as interesting and involving those living in New England with their own past. We necessarily live in the present, concerned with problems of work, life, careers, family, school and studies.”

An essential role in sustaining community of place to enable the proper functioning of our living. Without that quantum of entanglement we are but uncorrelated particles without any shared existence.

Blush. Thank you, John! I thought you put it well too.