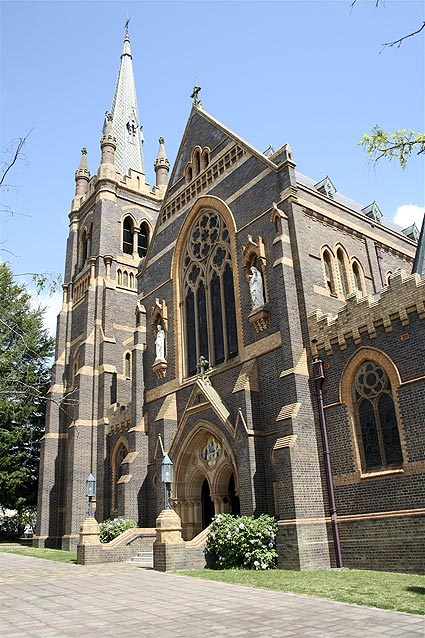 St Mary and Joseph Cathedral Armidale. Built by George Nott 1911-12, architect John Hennessy, the Cathedral required 1.1 million bricks with up to 30 men working on site This, the sixteenth in my series on New England's built landscape and architecture, is the forth and final columns on the remarkable life of builder George Nott.

Armidale, Friday 19 October 2012. Eight hundred people have gathered for a service to celebrate the 100th birthday of Armidale’s Catholic Cathedral of Saint Mary and Joseph.

Among those in the congregation is 91 year old Peggy Becke, the only surviving daughter of George Nott, the Cathedral’s builder. She wore a gold chain, part of a gold chain and watch set presented to her father by the grateful parishioners.

George F Nott was a devout Anglican, but his relationships with all of Armidale’s groups were good at a time when sometimes bitter sectarian divides were still a fact of Australian life. He had built with care and even donated to the building fund.

The Cathedral was designed by John Hennessy from the firm of architects Sherrin and Hennessy. Hennessy was a prominent Roman Catholic architect and a good friend of Cardinal Moran. His buildings include St Patrick’s College Manly and ’s College Hunter’s Hill.

Cardinal Moran laid the foundation stone for the new Cathedral on 5 February 1911. This had been a major build involving 1.1 million bricks with up to thirty men on site at any one time. Its completion in barely 20 months was a major achievement involving close liaison between builder and architect. 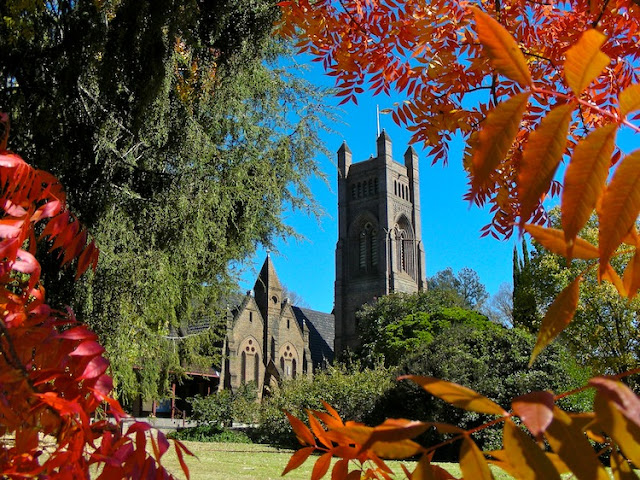 Twenty seven years later and just before his death, George Nott was involved in another church build that also left a major impression on the Armidale streetscape.

On 3 May 1939, the bell-tower of St Peter’s Anglican Cathedral was dedicated. The tower had been in the original plans by architect John Horbury Hunt, but had not been completed. It was now time to rectify that omission.

This time George Nott’s role was honorary supervisor. He also donated the 150,000 bricks used in the construction.

architects Castleden and Sara had been commissioned to build the tower, following as faithfully as possible Hunt’s original plans and specifications. The difficulty was that the builders and other tradesmen of the 1930s Art Deco period, the period which gave us the new Tattersall’s Hotel among other buildings, were inexperience in the techniques that Hunt had prescribed all those years before.

This is where George Nott with his long experience came into his own. He knew how to do things that had been forgotten, how to explain to the builders and craftsmen involved.

George Nott died on 16 June 1940. Over his long career, he had built many of the iconic buildings in Armidale and Inverell. He had built a considerable business empire. His donations of material and money had played a critical role in bringing community projects to success.

His legacy surrounds us today.

A productive marriage of commercial success and civic responsibility Jim. The quality of both the bricks themselves and the brickwork in Armidale and New England more generally has always impressed me. The clay sourced for brick making, to my eye, has provided a very solid and dense brick, resistant to most weathering agents. Altogether an interesting combination of entrepreneur, geology and craft skills have come together and given Armidale and New England a wonderful built heritage.

Good morning and happy new year, John. I agree with your points.

I need to look at the history of brickmaking. The invention of new industrial brickmaking processes in the first part of the 1850s revolutionised brick making. The exapnding brickworks in Armidale, Glen and Inverell all took advantage of this. But what about other towns across the broader New England?

Jim, I continue to enjoy your blog posts which help me connect to my heritage and help me to appreciate what a beautiful town Armidale is. You have done such good research on that part of the town's history....