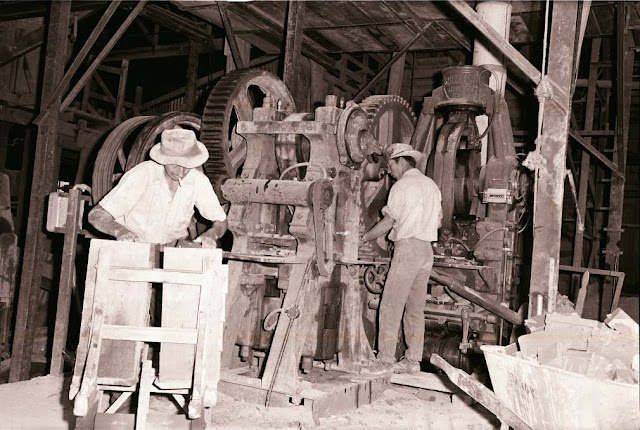 Workers at Wade's brickworks Inverell: Sold to Ben Wade in 1909 and later moved, the brickworks was founded by William Nott before being extended by George F. Knott in the early 1900s. This, the forteenth in my series on New England's built landscape and architecture, is the second of four columns on the remarkable life of builder George Nott.

Builder and philanthropist George Frederick Nott was born on the Breeza Plains in 1865, the son of William Randolp (WR) Nott and his wife Mary Ann Northey. I do not know much  about the early life of the Notts.

WR was the son of ex-convict Thomas Edward Nott who had been transported on the “” in 1816. At Sydney Cove, Thomas had met and married currency lass Charity Evans, the daughter of former soldier and then free settler Thomas Evans and ex-convict Judith Francis Bidwell.

Thomas and Charity settled in the Lower Hunter where. WR was born at Maitland in 1839. There WR met and married Marry Anne before moving north, ending up in Inverell around 1878.

WR was a skilled bricklayer with a love of the material and its application to building, something that his son George Frederick inherited. While timber still provided a core building material, the emerging commercial and professional classes in the growing towns demanded bricks, leading to the establishment of local brickworks.

WR prospered. He began making began making bricks on the banks of the at Inverell before establishing a site at nearby Goonowigall. Its not clear when George Frederick became involved in the business, but it seems likely that it happened at an early age.

By 1901, the now 36 year old was in charge of the facility. He had also established his own rapidly growing business empire in Armidale.

George Frederick was a skilled industrialist as well as builder. In 1901, the skilled brickmakers at Goonowigall could only make 1,000 bricks a day each, limiting production to 20,000 hand made bricks a week. Inverell was booming, and this was just not enough.

In 1909, George Frederick sold his Inverell brickworks to Ben Wade. He continued to build in Inverell, but his main industrial interests were now in Armidale. The brickworks he had established was moved to a new site in 1929, but continued to function until 1974.

In my next column in this series, I will look at George Frederick’s contribution to New England’s life and built landscape across three dimensions, as a builder, as and industrialist and as a philanthropist.

Should we worry about Charity Evans, the "currency lass"?

Afternoon, Hels. Sorry for the slow response. I blinked and laughed. It does sound like something out of a melodrama. For example, Tea Cooper's The Currency Lass. "She can run but can't hide" http://www.harlequinbooks.com.au/product/9781489226549

I am delighted to read your history of George F. Nott! I am a great-grandaughter of his: my grandfather, William Nott, was his youngest son, I believe. William's daughter, my mother Elaine, married an American soldier, Raymond Petersen, and emigrated to the United States where I was eventually born. I do hope to come to Armidale some day and see the buildings William built. Thank you so much for all this valuable background.... Gail

Thank you Gail. I hope that you do!