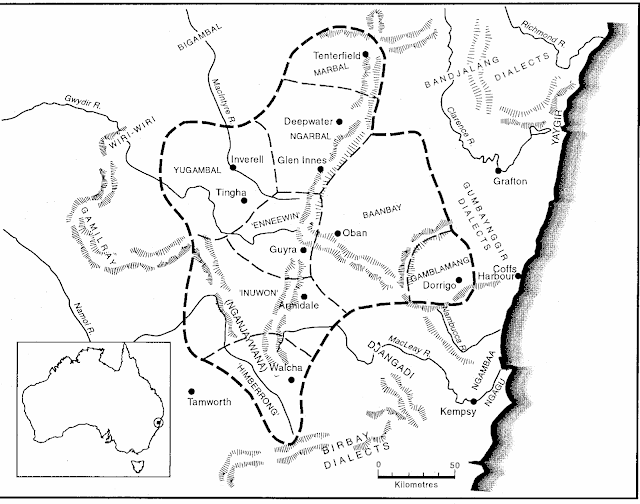 Across the land. A map showing Northern Tablelands Aboriginal languages identified by Terry Crowley. This is the third in a series discussing the deciphering of the mysteries of New England's Anaiwan or Nganjaywana Aboriginal language.

In my last column on the story of linguist Terry Crowley and the resolution of the mystery of the Anaiwan or Nganjaywana language, I noted the quick collapse of the Northern Tablelands’ languages following European occupation.

This collapse was partially due to the speed of pastoral expansion, but also to the relatively small size of the Tablelands’ language groups compared to those in surrounding areas.

The first analysis of the economic structure of traditional Aboriginal life including estimates of population sizes across the broader New England were actually done by me a very long time ago now!

It is clear that I underestimated the size of the Aboriginal population. However, Tablelands’ populations were not high compared to the very large language groups to the east and west and were therefore more vulnerable to disruption,

This is reflected in the poor records we have for the Tablelands’ languages. We just don’t have a lot of information, something that frustrates those now working to revive the Anaiwan language.

began his work on by painstakingly reviewing the material that we did have on the various language groups. The map will help you understand his conclusions.

On the east, both Baanbay and Gamblamang were dialects of the Gumbaynggir language, a very large language group spoken from the southern banks of the Clarence down to and including the . Language boundaries broadly followed watersheds, allowing Gumbaynggir influence to extend deep into the Tablelands.

There are three identified languages on the northern parts of the Tablelands, Yugambal, Ngarbal and Marbal. Information on these languages is scanty. However, it appears that they were mutually intelligible in the same way that a speaker of Danish and Swedish might understand the other.

suggests that these languages were linked linguistically to Djangadi (Dainggatti), the Aboriginal language spoken in the to the south of Gumbaynggir territory. There are also linkages through loan words to the adjoining Bandjalung language whose territory stretched from the northern banks of the Clarence into what is now southern .

Here Cowley identified two different language groups, the Ennewin around Guyra and then moving south the Inuwon followed by the Himberrong, two groups who spoke the Anaiwan or Nganjaywana language.

The Ennewin, Himberrong and Inuwon form the heart of the mystery we have been discussing. How and why were they different?