The man who cracked the Anaiwan code 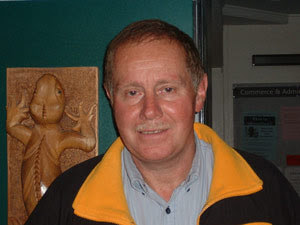 Terry Crowley: A brilliant linguist who shed light on the mystery of Anaiwan. This is the first in a series discussing the deciphering of the mysteries of New England's Anaiwan or Nganjaywana Aboriginal language

Next part in this series; Terry Crowley's hunt for traditional languages

It took the brilliant linguist Terry Crowley to crack the mystery attached to the Anaiwan or Nganjaywana language of the southern Tablelands. He did so as a third year student at the .

Terrence Michael Crowley was born on 1 April 1953 in Billericay just east of . The family emigrated to when was about seven years old, taking up a dairy farm outside Shepparton.

was dux at in 1970, enrolling the following year in a Bachelor’s degree in Asian Studies at ANU. There he came under the influence of R M W Dixon who interested him in Aboriginal languages. In 1974, he gained first class honours with a University Medal in linguistics and then worked as a research assistant in Bob Dixon’s department, again concentrating on Australian Aboriginal languages.

At this point, Terry Crowley’s interest moved to the languages of the Pacific and especially . His sudden and unexpected death from heart attack on 15 January 2005 came as a shock to friends and colleagues alike.

made his contribution to our understanding of the Aboriginal languages of the broader during the early part of his career.

Prior to ’s work, the Nganjaywana or Anaiwan language was a mystery. It seemed so different from other Aboriginal languages, a language on its own. Was it in fact a remnant of an earlier language, the sign of remnant group from an migration?

There has been dispute about the pattern of early human settlement of the Australian continent, disputes that have formed part of the so-called history wars. Are modern Aborigines direct descendants of a first founder group or have there been several waves of migration, with later arrivals mixing with and ultimately supplanting earlier arrivals?

The model extended and popularised by American anthropologist Joseph Birdsell suggested that settlement had come in three distinct waves involving different peoples. This model was supported by theoretical arguments, as well as skeletal, cultural, ethnographic and linguistic studies.

One thread in the discussion was that the Tasmanians, the pigmies of North East Queensland and perhaps the Anaiwan were remnants of an earlier migration pattern later supplanted by modern Aboriginal groups.

We now know, I think, that modern Australian Aboriginals are direct descendants of first settler groups. This does not rule out settlement by earlier hominids, we have no evidence here at all, nor does it rule out later admixtures. However, the basic pattern seems clear.

While modern DNA analysis is central to our new understanding, it was the work of linguists such as who filled in part of the pattern. In particular, showed that Anaiwan was related to surrounding languages.


I will continue this story next week.

Many years ago I had one of life's happenstance moments Jim that relates to the study of aboriginal language. I was visiting the Chinese porcelain collection in the Victoria and Albert Museum and struck up a conversation with another visitor. Turned out it was Mary Laughren on her way from Yuendumu settlement in the Northern Territory to MIT in Boston USA. Mary was studying the development of language at the time so for a good hour I had a privelaged conversation with an Acedemic on the structure of language brought to Australia by First Australians. The detail has gone with the passage of time but not the memory and interest of the meeting. Mary has written a eulogy to Ken Hale another natural born linguist as Terry Crowley was.
http://linguistics.mit.edu/hale/testimonies/

That would have been very interesting, Johnb. I stand in awe of the linguists because they have skills that are beyond me! Hale is an interesting man.