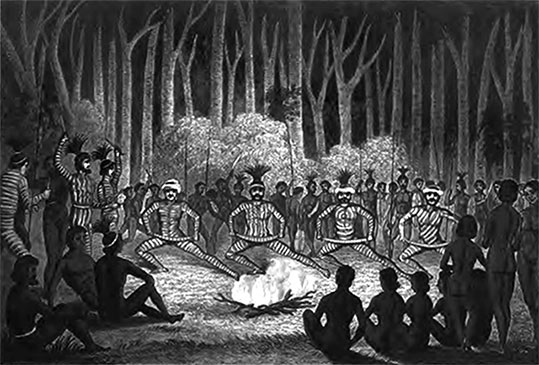 1842: A dance in the Macleay Valley at the end of an initiation ceremony. A key issue that Terry Crowley had to address in his work was the relationship between the Anaiwan or Nganjaywana language and those on the coast. This is the second in a series discussing the deciphering of the mysteries of New England's Anaiwan or Nganjaywana Aboriginal language.

Column one The man who cracked the Anaiwan code

I am not a linguist. Indeed, my early school attempts to learn Latin and French can only be described as spectacular failures, creating a fear of languages that lingers to this day. I make this point because we are now going to enter territory way beyond my normal professional competence.

We know that language changes over time. To understand this, you need only watch the TV clips celebrating the fiftieth anniversary of the 1967 Aboriginal constitutional referendum. Many people I know are surprised at just how “posh’ the Aboriginal activists of the time sounded.

The shifts in New Zealand English provides a second example. The “thuck” accent that we know today did not exist in 1967 outside a few isolated geographic areas.

Linguists have developed various techniques for analysing languages, changes in languages and the relationship between languages.

When linguist Terry Crowley began his study of the Anaiwan or Nganjaywana language, he had to overcome a number of problems.

The first was variety. Within broad language groups, each local group spoke their own language that might vary from their neighbours to some degree. There were language chains in which the language at each end might vary considerably.

Unlike current Australians, the Aborigines were also multi-lingual. They could switch between dialects or indeed languages depending on whom they were talking too. We see this today in the where some Aboriginal people may speak multiple languages, with English the third or fourth language spoken.

... the Anaiwan were effectively dispossessed in the space of just a few years. One effect was language collapse.

All this created difficulties for those few interested enough to record language beyond the complexity associated with just writing down the sounds in English. What language were they in fact recording?

In the case of the Tablelands languages, a further factor came into play.

One the European settlers did reach the Tableland, the whole area was at least loosely occupied within ten years. This had profound effects on the Anaiwan who were effectively dispossessed in the space of juts a few years. One effect was language collapse.

By the time Terry Crowley started his work, there were no native Nganjaywana speakers left. He therefore had to rely on the imperfect records left behind, using his linguistic skills.