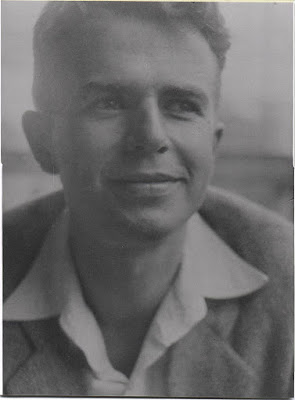 In a Facebook comment on my previous column in this series on the story of the Anaiwan or Nganjaywana language, Ndyiwaara Widders (a member of the Anaiwan Language Revival Group) mentioned the work of that remarkable American PhD student Gerhardt Laves.

Laves was the first person trained in modern linguistic field work and analysis to study Australian Aboriginal Languages. He came to in August 1929.

Alfred Reginald Radcliffe-Brown, then Professor of Anthropology at , had asked the great University Chicago linguist Edward Sapir to undertake a study of the Australian languages. Sapir could nor come, but sent Laves instead.

.Over the next two years Laves studied and recorded languages across beginning on the with Kumbaingeri (Gumbaynggir). As part of this, he collected material on Anaiwan and on Yugambal.

Laves was a meticulous worker, keeping detailed notes. All this material went back by ship with him when he returned to the in August 1931.

Laves worked on the material, but married in 1932. This was the end of his studies. Instead, he focused on family and building a career with the International Harvester Company.

It was not until 1981 that anthropology student Mark Francillon heard about Laves while working with L R Hiatt at Maningrida. Returning to , Francillon contacted Laves who led him into an attic full of boxes of original manuscript material that had been untouched for decades.

The value of this work was truly astounding, to use David Nash’s words,. “in its detail, accuracy and insight”. The intensively studied languages are represented by texts on mythological beings which are given English translations as well as interlinear glossing. There are also hundreds of file cards, each covering one sentence of the texts, with additional notes and cross-references.

I have sidetracked into the story of Gerhardt Laves partly because it’s a good yarn that holds out hope that we will find more yet unknown material. Here Ndyiwaara Widders has issued a plea for us to keep an eye out for material that, no matter how small, might assist in understanding and reviving the Anaiwan or Nganjaywana language.

I have sidetracked, too, because the Laves material was not available when Terry Crowley was cracking the Anaiwan mystery. I do not think that it invalidates his conclusions, but it does mean that we have additional material to work from that may affect elements of his analysis.

In my last two columns in this series, I will stick my neck out. Drawing from the work of Crowley and others, I will tell you the story of Aboriginal settlement of the Tablelands as I see it.

The existence of difference, whether in dialect or language must, I would think Jim, illustrate separation by boundaries, whether physical, cultural or some combination of both. The cultural strength of 'Country' as being specific to a group might be sufficient in part to support this development in dialect or language. How productive it would be if the re-discovered Lave papers were to be digitised and made generally available.

It would be good to have Laves readily available. I am in touch with Margaret Sharpe, a linguist who has worked on the New England languages and is working with the Anaiwan language revival group. I am hoping that her knowledge of the relationships between languages will help me explain patterns.

The next in my Anaiwan language series is already on line, although it won't appear in the print edition until next Wednesday - http://www.armidaleexpress.com.au/story/4762100/the-mystery-of-the-anaiwan/?cs=466