"the old and new Rockies, have become stories hidden within the New England landscape"

There are many stories hidden deep within the New England landscape. In some cases markers remain, an iron pot or cherry tree. In other cases every sign has vanished even from memory itself.

The Chinese who went to the Californian diggings called America the gold mountain. When gold was discovered in Australia it was called the new gold mountain. America became the old gold mountain. This story is well known. Few New Englanders know that there is a local equivalent. 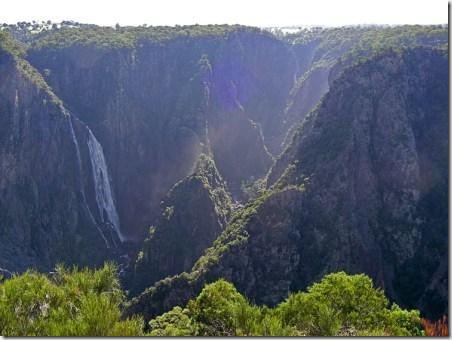 By 1856, the Rocky River gold fields had become a substantial settlement with stores, bakers, butchers, boarding houses, blacksmiths, tailors, barbers and lolly pop makers. Drays waited in the main street for the next load.

The Express’s own correspondent reported that he saw many miners wash two ounces of gold before breakfast. That’s worth a fair bit at today’s gold prices!

Twelve months later, business was down. “This place was like a town at one time”, wrote the Express correspondent, “now it is more like a country village.” Meantime, word was coming through of another field to the north in the rugged headwaters of the Clarence.

“Timbarra flows sweetly through gold-bearing hills” wrote John Taite in 1863. The Timbarra in question rises at Glen Elgin and then winds its way through rugged country some seventy miles before joining the Clarence at Tabulam.

Gold first appears to have been discovered on the Timbarra in 1853. By 1857, many of the diggers from Rocky River had moved to Glen Elgin and then to other newly discovered field beyond. They called the Timbarra Rocky River too because of its rocks. So now people spoke of the old and new Rockies.

The old Rocky River clung to the hope of new discoveries, but drift continued. By 1859 when elections were held for the newly created Northern Gold Fields electorate, the diggers on the Upper Clarence fields outnumbered those at Rocky River four to one.

Today, few signs remain of the activity that once took place along the new Rocky River, destroyed by bushfires, floods and regeneration of the bush. The mail runs, the gold escorts that took the gold first to Armidale and then to Grafton from the Upper Clarence fields, the political fights over gold field representation are fading memories.

The Upper Clarence gold fields, the old and new Rockies, have become stories hidden within the New England landscape.