The entry on John Dunmore Lang in the Australian Dictionary of Biography describes him variously as Presbyterian clergyman, politician, educationist, immigration organiser, historian, anthropologist, journalist, goal-bird and, in his wife’s words engraved on his statue in Sydney, “Patriot and Statesman.” 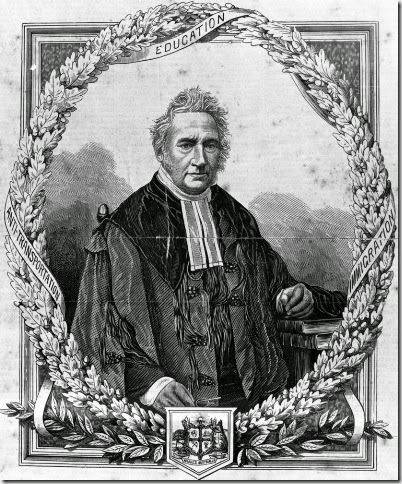 Lang was born in Scotland in 1799, the son of small landowner William Lang and his wife Mary Dunmore. Lang’s mother seems to have had a considerable influence on him. In the words of one of Lang’s biographers, she had formidable powers of moral indignation and such capacity for vituperation that in comparison her son’s most savage strictures seemed but a mild remonstrance!

After qualifying for the ministry, Lang arrived in Sydney in May 1823 as the first Presbyterian minister. There he threw himself into the turbulent religious, political and educational life of the still young colony.

In early 1840, Lang sailed for the US: In travels through eleven states he was deeply impressed by the great merit of republican government based on the independent sovereignty of each state and a large measure of local autonomy. He returned with a new vision for Australia expressed in two books, The Coming Event; or, the United Provinces of Australia (Sydney, 1850) and Freedom and Independence for the Golden Lands of Australia (London, 1852).

This was a time of considerable constitutional change. As part of that change, the original colony of NSW was progressively subdivided with the creation of Van Dieman’s Land (1825), Western Australia (1832), South Australia (1836) and New Zealand (1841).

In June 1843, Lang was elected to represent the Port Phillip District in the NSW Legislative Council in Sydney. There were deep concerns at Port Phillip about remote government from Sydney, about the misuse of revenue raised in Port Phillip on expenditure outside Port Phillip. Further, the District had only six representatives in the Council, too few to make a real impact.

Driven by his vision of a federated Australia with multiple states, Lang threw himself into the self-government cause. This was achieved in 1851 with the creation of Victoria following the passage of the Australian Colonies Act. Lang now turned his attention to Moreton Bay.

The suggestion that a new colony might be formed north of the Manning River if parent colony NSW became too large and unwieldy had first been made by the British Secretary of State in Governor Gipps’ time (1838-1846). A clause in the Constitution Act therefore enabled her Majesty on the petition of inhabitant householders north of the 30th parallel of south latitude to detach such territories from New South Wales and to erect them into a separate colony or colonies. This boundary included the Clarence River, but subdivided the Northern Tablelands, leaving Armidale in NSW.

The stage was now set for a battle that would help set the direction and form the character of the twentieth century campaign for self-government for New England.

If you want to follow the story of the Northern or New England self-government movement, this is the entry post for the whole series.

Posted by Jim Belshaw at 1:17 pm No comments:

In January 1851 a meeting in Brisbane supported by squatters from the Northern Tablelands, the Clarence and Darling Downs formed the Northern Districts Separation Association. Their aim was the creation of a new colony by the subdivision of NSW.

One hundred and sixty three years later, agitation for self government for the North continues. Last Monday, the ABC’s Kelly Fuller featured the New England New State Movement. As I write, the New England New State Facebook group page has 306 members. The Movement is presently much diminished from its peak to be sure, but at one hundred and sixty three years it is the oldest surviving political movement in Australia.
History is written by the winners, controlled by the gatekeepers who determine what will be researched and published, what is newsworthy. Since the 1967 plebiscite defeat, the fight for New England self-government has diminished to just a footnote in the history books. As it has done so, the recognition of the North, the broader New England, has diminished too.

Today, we count less than Tasmania or the ACT or the Northern Territory; less than Western Sydney, the Sunshine Coast, the Pilbara or the Kimberley. You see, we don’t exist. We are just not there.
Over the next six or so columns, I plan to tell you a little about the history of the continuing fight for New England self-government from the 1850s to the present time.

It’s not a story that you will find in the conventional history books. To those writers, our story is neither important nor relevant. However, it is to us. More, it’s important in a general sense as an integral thread in Australian history.

Over its history, the Northern later New England New State Movement forced the creation of one Federal and two state royal commissions into constitutional issues. It played a major role in the establishment of the most significant Commonwealth Parliamentary inquiry into the constitution. It led to pamphlets, book, articles, summer schools and conferences on constitutional issues.

The Movement had to do this because constitutional rigidities were, and remain, the biggest problem New England faced in gaining self government. In doing so, the Movement articulated all the main issues that have to be addressed by Mr Abbott’s White Paper on reform of the Federation.

Along the way, the Movement delivered quite tangible benefits to the North, going some way towards overcoming the parochial local and regional divides that have always bedevilled attempts at cooperative action.

Next week, I will begin the story by looking at the colonial origins of the Movement and especially that stormy petrel, the Presbyterian clergyman John Dunmore Lang who made such a mark on Australian history.

Posted by Jim Belshaw at 9:26 pm No comments: 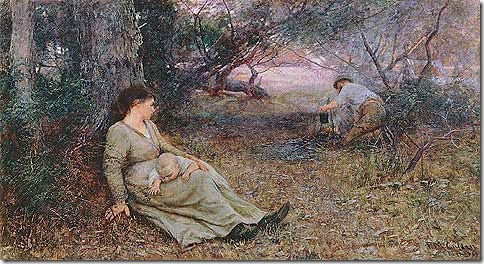 6). It’s a bush scene. The man lights a fire to boil the billy. His young wife leans back against a tree, eyes shut, exhausted. A strapping baby rests upon her lap.

That painting is in the NSW Art Gallery. I always focus on the woman. Each time, I wonder how she coped on the track with a long and apparently heavy dress like that, with shoes or boots that appear quite uncomfortable.

In my last column, I suggested that being a wife and mother in the nineteenth century was hard and sometimes dangerous work, especially for the ordinary woman without access to domestic help to do the really hard work.

Consider an example. Older Armidale residents will remember laundries often to be found in a separate room at the back of the house with their coppers. Fires had to be lit, the water in the copper heated, the clothes washed in the hot water stirred with an old broomstick. Then the water was squeezed out using a mangle and clothes hung on long lines stretched across the back yard.

This was, in fact, relative luxury. Fifty years earlier, clothes were often boiled in a kerosene tin set on bars across an open fire. In both cases, the time and effort involved was substantial.

Once clean, those clothes requiring ironing were ironed with heavy metal irons heated on the stove. There were different types of irons depending on the clothes, but in all cases the irons cooled quite quickly and had to be reheated. Is it any wonder that washing day was an ordeal?

If you look at the time and effort involved in all this, you might see why I rank labour saving devices as the first and most important advance supporting the changing role of women. Many women did do paid work while married, but the time to do so was just so limited.

I rank improvements in health care as the second most important factor in supporting the changing role of women. It meant that fewer women died in child birth, something obviously important from a personal and family perspective. But it also meant that fewer children died.

Infant death was one key reason for the big families of the past. It meant that you needed more children to ensure family survival. You could not choose to have a particular family size, to stop having children to achieve that, because infant and child mortality made such a choice impossible.

I doubt that the women’s revolution could have happened without these two things, labour saving devices plus improvements in health care. Labour saving devices gave women extra time while still maintaining family responsibilities. Improvements in health care meant that women had to spend less time in child rearing. The combination led to a social revolution.

Posted by Jim Belshaw at 9:10 pm No comments:

History revisited – bobbed hair & the start of a revolution

When I first studied history at school, it was all about war, politics, kings and battles. There was very little about domestic life or, indeed, life in general. Now, fortunately, the historical canvas is painted in much broader terms.

Don’t get me wrong, I actually like war, politics, kings and battles and even economics! However, the details of life are not just interesting, but set a basic context that helps explain other things.

Take, as an example, the rise of the women’s bobbed hair cut.

To my mind, bobbed hair is a symbol of the changes that have taken place in women’s life over the twentieth century. Shorter hair became necessary during the First World War when women started working in factories. It was practical. When, to the shock of the traditionalists, it became a fashion statement during the 1920s, it was again in part because it was practical.

The long and complex clothing worn by women in the last part of the 19th century may have been fashionable and attractive, but it could be an absolute pain. Quite literally, in fact. The high necked dresses with their multiple buttons stretching up to the back of the neck caught hair that had to be painfully and carefully untangled.

I had enough problems with my daughters getting knots out as I brushed their hair. I hate to think how I would have gone with a wife or partner with hair caught in her high-necked dress.

In the nineteenth century, being a wife and mother was hard and sometimes dangerous work.

It was hard because of the absence of any form of labour saving device. With the man of the house often absent for extended period, women had to undertake hard physical labour including sawing wood so that it could be chopped. Hard labour continued even when the man was home in washing, cooking and cleaning.

It was dangerous, too. It wasn’t just the dangers of childbirth at a time when so many women had very large numbers of children with limited medical knowledge or support. Open fires, fuel stoves, moving heavy pots or kerosene lamps all provided their own dangers and challenges. Severe burns were common.

Is it any wonder that women formed powerful support networks, that men were judged first and foremost by a single rule, is he a good provider? In my next column, I will look at some of the basic changes that have taken place in women’s life over the last century and a half.

Posted by Jim Belshaw at 6:33 pm No comments: