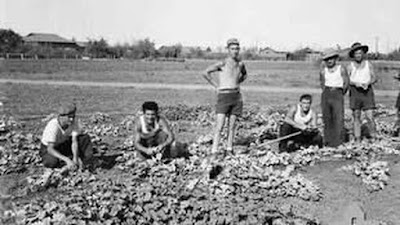 Replacement labour: Some 18,000 Italian POWs were sent to Australia during World War II. 10,000 became farm workers some on IlParran. This, the eleventh in a series on growing up on the Northern or New England Tablelands, continues the story of writer Judith Wallace.

For many of us, childhood memories are especially intense. Time seems to stretch, to last for ever.

Then as we grow older, as more events and responsibilities crowd into our lives, things begin to blur. We have to put aside memories as our brains become more crowded. Yet childhood memories remain because they have a continuing and indeed increasing emotional intensity.

This was true of writer Judith Wallace. Some of the most intense and lyrical pieces in her memoir Memories of a Country Child-hood relate to her early childhood growing up on Ilparran, a large station to the west of Glen Innes. .

Ilparran is only 18 miles (29k) from Glen Innes. Today one would pop into the car without thinking. But even in the 1930s when Judith was a child, visits to town were rare.

The old stations were self-contained worlds, villages. There was the inside (life in the big house or homestead) and then the outside (life on the property outside the big house). Beyond that was the rest of the world.

Up to the Second World War, most stations retained domestic staff - cooks, maids, nannies - who looked after the inside. This was a more formal world with marked class distinctions.

The first part of Judith’s book records this life from the viewpoint of the child. Initially the focus is on life in the house and immediate surrounds, but progressively widens as the growing child is able to explore the property around the house.

A turning point comes when she and her sister are given ponies. Now they can explore still more widely.

The Second World War brings major changes as staff are drawn away by the War. Outside staff are partially replaced by Italian POWs, inside staff by the family.

The young Judith takes responsibility for the necessary milking, rising at 5.30 to tramp across the sometimes black-frost ground to gather the cows.

The girl enjoyed it, resting her head against the warm side of the patient cows for protection from the cold. Then, milking done, she carries the pails back to the warm kitchen where bacon is cooking.

While I knew that Italian POWs had worked on the farms, I did not know that they were in New England until researching this column, nor did I know the numbers involved. Something else I have to investigate!

The demons of a historic New England figure 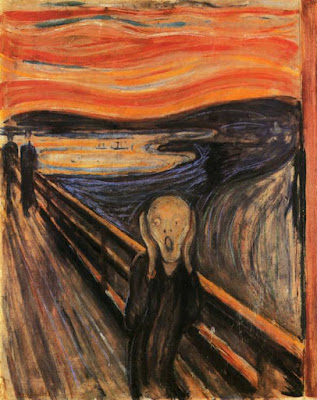 Edvard Munch, The Scream 1893: Driven by his own demons, William Ogilvie, Edward's eldest son, took his own life in 1920.This, the tenth in a series on growing up on the Northern or New England Tablelands, continues the story of writer Judith Wallace

Life can sometimes become too much. On 18 November 1920, William Ogilvie was found lying on his bed at Sydney’s Usher’s Hotel with a bullet wound in his temple, a revolver clasped in his right hand. He was only 58.

Near his body were found a letter to his solicitor plus telegrams to his wife and children.

“Good-bye, my darling wife, one telegram read, “I shall never see you alive again. I have written you to Ilparran today, explaining everything. Fondest love, my dearest dear.”

I do not know what drove him to suicide, can only imagine the distress it caused his family.

Edward, the eldest boy and Judith Wallace’s father, was in England. After beginning his education at TAS (The Armidale School), he had gone to England to study at Oxford, his father’s old university. He was, the TAS magazine observed, one of the few Armidalians who had studied at Oxford.

Edward underwent officer training and in 1914 became a second lieutenant in the 17th Lancers. At the time of his father’s death in 1920, he was still in England as a lieutenant with the Life Guards.

Now as his father had wished, Edward returned home to help his mother and manage Ilparran as well as the family’s other interests.

Four years after his return, he married the English born Dorothy Gytha Micklem in Brisbane at what appears to have been a considerable social wedding.

The Micklems owned property in North Queensland, so the papers presented it as a union of two major pastoral families with the Governor of Queensland present as one of the guests.

To house his new wife, Edward built a new house on the property. That house and the surrounding property form the centre piece of Judith Wallace’s memoir on he childhood.

Writing in 1996, David McCooey (Artful Histories: Modern Australian Autobiography) features Judith’s book as one example in his study of Australian autobiography. He capturing the key elements of the book to place them in a broader context; ideas of place and time; the elegiac nature of accounts of place; the way time weaves itself through the narrative.

It is indeed a haunting, sad, but magical book, one that shows life at a particular time in a particular place. Australia is not and never has been a uniform whole, but a place of many and varied stories.

Next week I will look at key features in Judith’s story.

I used the famous Munch image to illustrate this column because it captured that sense of personal despair  Over on ART and ARCHITECTURE, mainly, Hel's Edvard Munch, Norwegian meteorology and mental ill health provides some fascinating background to Munch painting.


You local history articles are greatly appreciated and on some topics you have a unique perspective: an insider looking out.  This message is specifically prompted by your sequence on William Ogilvie -- of particular interest to me because I actually visited Yulgilbar Castle circa 1952.  It was a mess, of course, and ascending the stairs was not prudent; my main memories are of lucerne hay bales stored where there was still some roof and of the lions couchant at the entrance, maybe they are still there.  My companions on the day informed that a nearby creek called “OBX Creek” was so named because the landholders along it were Ogilvie, Boyd and a completely illiterate chap who only signed documents with an ‘X’.  I took that with a grain of salt but it’s a lovely story and it would be nice if it were true.  Can you shed any light on this this pressing matter?

I fear that I can't provide light on QBX Creek. Perhaps a reader can? I did love the description of Yugilbar. I understand - I have still to visit - that the upstairs is gone. Too difficult to repair.