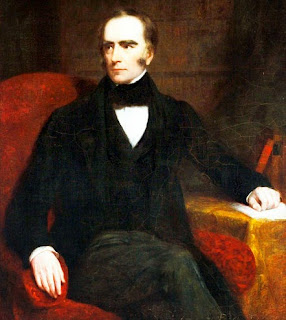 Sir George Gipps was Governor of the colony of NSW for eight years between 1838 and 1846.  Jim Belshaw continues the story of Terrible Vale, the Taylors and the early days of the New England pastoral industry.

Alexander Macleay was not the only Northern member elected to the Legislative Council in that first NSW election of June 1843 so vividly described by sixteen year old Annabella Innes. Two other Northern representatives were also elected, both for districts centered on the Hunter.

One was Richard Windeyer, another prominent name in the early history of NSW. The second was someone I have talked about before, William Dumaresq, one of the two brothers who left their name imprinted on Armidale.

I do not think that either William Tydd Taylor or his wife Margaretta came down to Port Macquarie for the election. Certainly Annabella did not mention them. However, William Taylor was now becoming a prominent public figure in his own right, a standing that would later see him elected to the NSW Legislative Assembly as the second member for New England.

With Commissioner George James Macdonald some distance away in Armidale, William Taylor became the figure of authority in the southern part of the New England Tablelands. The role wasn’t always easy, for it involved the administration of justice in what was still in many ways a penal colony.

In 1845, Governor Gipps appointed William Taylor as councilor for the District of Macquarie. The Constitution Act of 1842 that had created a partially elected Legislative Council also provided for the creation of district councils to raise rates and undertake various local government activities.

This proposal proved immensely unpopular. The colony was still recovering from a depression that had adversely affected Government revenues, as well as private fortunes.

Governor Gipps was an advocate of free immigration. Subsidised immigration schemes were established, funded from the proceeds of land sales. Among those who came were New England’s first German settlers, another thread in our story.

Immigration peaked just as depression gripped and land sales collapsed. The Gipps administration, faced with almost £1,000,000 in immigration orders that it could not pay for, struggled to find funds.

In these circumstances landowners considered, accurately enough, that the district councils were simply another way of funding government activities and therefore resisted with vigour.

Unable to proceed with the formation of the councils as planned, the Governor legislated for their creation and then appointed councilors including William Taylor.

In many cases, the newly appointed councils simply refused to meet and, in the end, this first attempt to create local government collapsed. Local government as we know it today was still decades away.

At this point, we do not know if the Macquarie District Council ever met or, if it did meet, just what it did. William Taylor was closely aligned with the landowning interests opposing the creation of the councils, so it is quite possible that the Macquarie Council remained an entity in name alone. 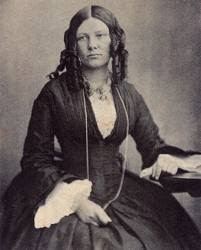 Do you find constitutional matters terribly boring? I did at school and I think that most Australians do now.

In fact, constitutional discussions and decisions are some of the most fascinating historical topics, for they represent then current controversies and set the frame for later events. You only have to look at the current Brexit debate to see what I mean!

We are now at the point in the sprawling story of William Tydd Taylor and his wife Margaretta Lucy Lind and their world where constitutional matters become important, a time when key aspects of our system of Government were established.

By 1823, the growing colony with its rising number of free settlers, emancipists and locally born required a new system of governance. In that year, the British Parliament passed an act “for the better administration of Justice in and .”

The NSW Act as it was known created a 5-7 person Legislative Council to advise the Governor It also established a judicial system, with the new Chief Justice given the power to veto colonial legislation that he considered to be in breach of the laws of .

The new Council met for the first time on 25 August 1824. Its first piece of legislation passed on 28 September 1824 was a Currency Act. Then, as now, economics was important!

Council members were still appointed, but the presence of the non-executive members provided an external and increasing fractious check on executive government.

In 1842, the British Parliament passes the first Constitution Act. Membership of the Council was increased to 36, of which 24 members were to be elected. The franchise was limited, but this would still be the first Parliamentary election in the colony, marking a major constitutional step.

The elections were scheduled for June 1843. Former colonial secretary Alexander Macleay decided to stand for the districts around Port Macquarie where his son-in-law Archibald Clunes Innes, William's cousin, was such a major figure.

We have a very clear picture of that first election from the journal of Archibald Innes’s sixteen year old niece Annabella. By 1843, the depression had forced Innes to retrench, but he still maintained considerable state at including a butler, two footmen, four maids and a personal piper!

The house filled with visitors including Alexander Macleay. There was constant movement, with the girls making favours in Macleay’s colours to be worn by the men on election day.

Polling day Friday 23 June dawned bright. The men left for Port Macquarie by coach and horseback, joined outside the gate by six men on horseback carrying flags to escort the party. It was quite a show.

Macleay was elected and would become first speaker of the new Parliament. But to Annabella, it was the colour and excitement that counted. She mentions the result only in passing! 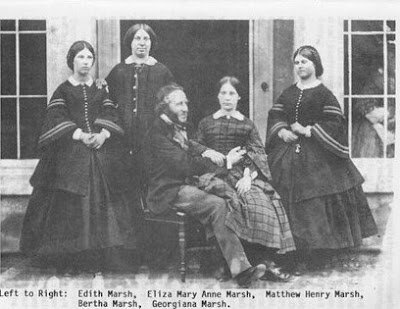 Jim Belshaw continues the story of Terrible Vale, the Taylors and the early days of the New England pastoral industry. Mathew Henry Marsh and family

In an earlier column, I spoke of the friendship that formed between the Taylor and Marsh families following the arrival of Mathew Henry Marsh’s new wife Elizabeth. Eliza and Margaretta Taylor had attended the same school and now shared common experiences.

Mathew Henry Marsh (1810-1881) was born in , eldest son of the Reverend Mathew Marsh and wife Margaret. Marsh was educated at and , and then began practice as a barrister. Finding briefs few, he followed the advice of his mother’s brother and decided to emigrate. It would prove a wise move.

Mathew Marsh clearly had access to money. He arrived in in June 1840 and then, later that year, purchased a 34,000 acre (13,759 ha) run from Robert Ramsay Mackenzie which he named Salisbury Plains. We have come across Robert Mackenzie before, for it was he that sold the adjoining run of Terrible Valley to Messrs Taylor and Middleton at around the same time.

I almost wrote that Mathew Marsh returned to to find a wife, for that is what he did, but I presume that he already knew Eliza. That may be just a presumption, for Marsh was clearly a very determined man. Just three years after arriving in the colony, he had returned with substantial holdings to his name.

On their return to the colony, Mathew and Eliza lived in first an old canvas lined slab hut called Old Sarum until Salisbury Court was finished in 1846. It was around six miles, a bit under ten kilometers, between Margaretta and Eliza, and the two visited each other on a regular basis.

It appears that Mathew Marsh could be a stroppy man. He was also a conservative one. But it is also clear that he was a very good manager, building his wealth through land. He was also something of a romantic. 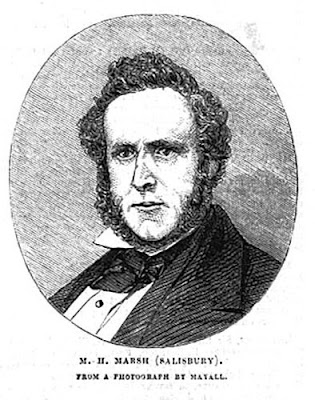 In August 1855, Mathew would return to leaving brother Charles to run the properties. In , Mathew became a member of the British Parliament for the liberal interest, but the had burnt itself into his soul.

Marsh as a UK MP. Appropriately enough, he was Member for Salisbury.

Ten years after leaving, Marsh returned to on a trip. There his support for Queensland self-government, Marsh is part of the continuing story of New England’s own fight for self-government, was recognized at a public banquet in Brisbane staged in his honour.

In 1867, Marsh published Overland from Southhampton to Queensland, telling the story of his trip. It’s a good travel yarn, with the latter part full of his early experiences.

Marsh was only thirty when he first came to . The love of country that was formed partly out of the sense of a young man’s adventure is deeply embedded in the book in prose and poetry. This was, he suggested, the most beautiful countryside in the world.

If Commissioner George James Macdonald was ’s first European poet, Marsh may well have been the second.

Posted by Jim Belshaw at 9:40 pm No comments: