Did you know that the University of New England made a significant, pioneering contribution to the development of dance in Australia? Did you know, too, that some of the luminaries of Australian ballet came to Armidale to teach?

I had known, but I hadn’t actually realised the importance of the contribution until I came to read dance educator Shirley McKechnie’s 1991 inaugural Dame Peggy van Praagh Memorial Address.

The University of New England summer schools were conceived in part as a way of fulfilling the University’s Northern outreach role, in part to utilise campus facilities left largely empty during the long summer vacation. By the mid sixties, they had become an institution in their own right.

Thinking about possible program ideas, Bernard James as Director of Continuing Education decided to include a ballet or dance component in the arts stream. The timing was perfect.

The 1950s and early 1960 had seen rapidly growing Australian interest in arts and cultural activities, including dance. In 1962, with the support of the Australian government, Peggy van Praagh became the founding artistic director of the Australian Ballet.

James approached van Praagh with his idea. She became enthusiastic and completely involved. Planning continued over 1966, with van Praagh directing every element of the evolving program.

The resulting school held in January 1967 was the first such event in Australian history. .It was a huge success, drawing one hundred people from across Australia with a few from New Zealand to a packed program featuring key figures from the Australian Ballet.

Whereas the first schools focused on classical ballet, the next two in 1974 and 1976 were billed as choreographic and dance workshops, with Shirley McKechnie playing a lead role in association with van Praagh. By 1976, the last school, they had become an international institution, attracting tutors from Australia, London and New York.

It is hard now to visualise a world in which Armidale occupied a small niche on the international dance scene, equally hard to visualise the excitement generated by the Armidale summer schools. There creativity was fostered, there some of Australia’s most prominent artists made contributions, and there the talents of aspiring choreographers, dancers, writers and historians - some, such as Graeme Murphy, now with an international reputation - were nurtured.

What happened? Why was the 1976 school the last?

The world changed. A University of New England struggling with rising student numbers and limited resources, narrowed its focus, giving up elements of its role in the need to survive day-to-day. The importance of what had been achieved was simply not seen.

I am not being critical here. Only through the prism of history can we see the importance of what Bernard James achieved.

In 1974, the University of New England presented Peggy van Praagh with an Honorary Doctor of Letters. It was well deserved.

Posted by Jim Belshaw at 4:19 pm No comments: Links to this post

If you know a little bit of history, you can find many things on New England roads, hints or signals of our shared past.

Those driving south along Thunderbolt’s Way will find a modern bridge marked Bergen-op-Zoom Creek, Irish Town Bridge. What a strange conjunction, one might ask, Dutch and Irish? Indeed, a friend did!

A little before the bridge on the left hand side of the road are a few old buildings with a sign that tells at least part of the story. It’s not a big sign. You have to watch for it.

In many parts of New England, families with common connection settled near each other, creating small communities. At Kelly’s Plains, for example, a small community of German Catholics developed – Brandschieds, Posts and Eichorns. At Irish Town, as the name suggests, it was the Irish.

At the time Irish Town was established, many squatters still preferred to employ single men. They were cheaper. Abraham Nivison from Ohio Station took a different view. He preferred 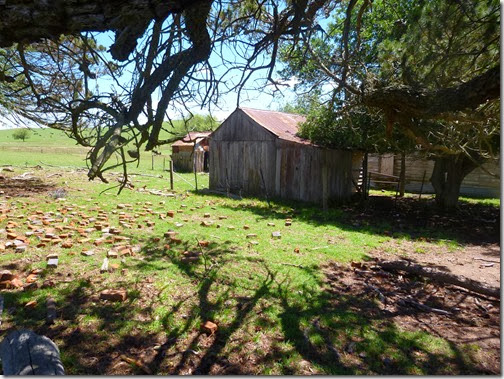 A devout Protestant, Abraham also surprised his fellow pastoralists by preferring Irish families. They were good workers, while their generally large families supplied a workforce at a time when labour was very scarce.

Some of those from Ohio and neighbouring Bergen-op-Zoom Station - shepherds, shearers and wheelwights - chose to live nearby each other on small allotments, creating the community that became known as Irish Town. From here, the men travelled for nearby work.

The blocks weren’t big. However, they allowed for vegetable gardens and fruit trees, perhaps a cow and another few animals, thus supplementing family income and adding variety to daily diet. There was also companionship and mutual support.

The Irish Town community was relatively short lived. By the 1870s, it was in clear decline as families were drawn away by other opportunities, including especially mining. Today, only Homeleigh remains, with the location of other houses marked just by trees.

Thomas and Bridget Blake occupied the land in the 1840s. The remaining buildings themselves date from the 1850s when Thomas and Bridget’s daughter Mary took up a block of 84 acres (34 hectares). The buildings survive because the Blake family and their descendents, the Betts family, lived here until the 1980s. They include the original one room Blake slab cottage and the original small dairy.

Action to preserve the site was taken by the Walcha and District Historical Society, with support from Walcha Shire Council. They arranged for an archaeological survey that showed the bond of shared cultural heritage motivating this Irish enclave. Now the site survives as a very rare example of the small selector’s home.

You can see the site from the road and it is worth stopping. However, Homeleigh is private property. If you would like to inspect properly, you will need to contact the Walcha and District Historical Society who can arrange a visit.

Posted by Jim Belshaw at 10:54 am No comments: Links to this post

On 20 October 1874, Dr Samuel Spasshatt died of typhoid fever. He was still relatively young, in his early forties, and had been practicing in Armidale since 1863.

Spasshatt’s death left his wife Angelina in a difficult position. There was not a lot of money and she had four young daughters to support. To support the family, she decided to establish a school for girls. “I must do something and I am glad of it,” she confided to her brother. “If it were not for the children I should give up and die.”

Samuel and Angelina are part of the texture of Armidale’s history. Samuel was a pioneering doctor, while Angelina’s school contributed to the rise of Armidale as an educational centre. However, it was not this that caught my eye, but the reference to Samuel’s death from typhoid.

Today, deaths from cholera or typhoid are rare in Australia. As a consequence, we forget that they were once common killers

Back in the 1970s and early 1980s, a team of economic historians from the University of New England including Ron Neale and Graydon Henning undertook a major study of Hillgrove. The project looked at Hillgrove in a broader context, at the way that the study of a local mining community might inform the broader study of economic history.

The team called their second report Life and death in Hillgrove 1870-1914. Beneath the sometimes dry analysis, we can glimpse very human stories.

Hillgrove was often short of water. The mines had first claim on the water that was available. There were no sewerage or waste removal services.

Bracken Street, Hillgrove’s main street, ran along a ridge. On Bracken Street, filth and rubbish accumulated from homes and businesses. When it rained, the debris and filth were carried down the ridge and especially to Brereton Street, another main thoroughfare with its own waste, forming putrid pools.

This is not the mediaeval world of Europe with its noisome alley ways. This is New England in the last part of the nineteenth century. During dry periods when water was scarce, people gathered water where they could. Not surprisingly, water borne diseases were common, especially among the young.

In 1893 and 1894 there was a major outbreak of food and water borne diseases. Twenty one people died, nine from typhoid, two from dysentery, ten from infantile diarrhoea. In 1897/98 there was another serious outbreak, leading to eighteen deaths. This time, something was done. A Government funded water supply was created, then a municipality was formed.

Over the last twelve months I have written a number of columns about the history of community progress associations and local government. To my mind, the Hillgrove story is another example of their importance.

Posted by Jim Belshaw at 5:01 am No comments: Links to this post