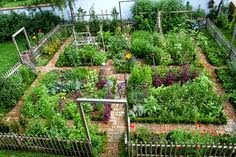 THINGS OF THE PAST: kitchen gardens were once a common sight in Australian back yards, but Jim Belshaw explains they are becoming rarer as the years pass.

A week back, I was wandering around a suburb looking at the architecture and the pattern of life. The thing I most noticed was the absence of kitchen gardens.

Growing up in Armidale, the garden was part of our life. It had apple, apricot and plum trees. There were raspberries, gooseberries, red and black currents. And there were lots of vegetables.

In the mornings sometimes I would go outside and pick raspberries to bring back and crush with cream and sugar. Alternatively, I would pick a jar of preserves of the shelf made with the Fowlers Vacola outfit. This was stored in the garage for use during the flush times for various local fruits.

Suffering from an acute feeling of nostalgia, I thought that over the next few columns I might share with you a little on our changing habits in food. To understand this, there are just a few facts that you need to fix in your minds.

The first is the decline in the calories required to support daily activities. At the end of the nineteenth century, men humped weights as a matter of course that would now be illegal outside gyms. On the female side, too, the eighty per cent of women without servants engaged in the sheer physical drudgery of maintaining households without those labour saving devices we now take for granted. Both men and women walked long distances as a matter of course.

As life became more sedentary, the required daily calorie intake dropped. My best guess, and it is only a guess, is that it may well have halved over the twentieth century. This led to changes in food tastes.

At the start of the twentieth century, cook books were full of cake and biscuit recipes. They ran for pages. There were hundreds of local variations. Cakes were eaten at meals, served to visitors, taken in packed lunches.

By the end of the twentieth century, the cake was largely vanquished. This was partly due to greater choice in sweet things including ice cream, more to the decline in calorie requirements.

The second important fact to remember is the continuous improvements in the production, preservation, transportation and distribution of food stuffs. We know this, of course, but do we always understand just how it has affected the look, feel and taste of the food we eat?

Take a simple thing like bread. Today we think of bread largely in terms of bread types. Given the type, we expect taste to be common, although we do consider that some bread makers are better than others. It is hard for us to recognise that bread in one locality might have tasted different from the same loaf in another place depending on the wheat, wood and method of cooking.

Finally, we need to recognise the importance of changing fads and fancies, including the deeply held and strongly argued views of members of the medical profession.

In my next column, I will look at the changing roles of bread and meat.

Posted by Jim Belshaw at 7:39 pm No comments: Links to this post

Have you ever wondered why ’s capital cities look so different outside the uniformity provided by modern buildings? Yes, part is due to climate, part to variations in available building material. However, beyond this lies a more unseen influence, the impact of early architects.

Each of the new Australian settlements from NSW in 1788 (Francis Greenway or John Verge) to in 1836 (Sir George Strickland) to in 1913 (Walter Burley Griffin) had an early dominant architect or architects who placed their long term mark on the built environment.

The very early architects such as Francis Greenway had limited formal training yet could still design attractive buildings. They brought with them their knowledge of English building and architecture at the time they left for the colonies, but they also brought or had access to architectural pattern books, essentially architectural manuals, as did some of their customers.

Governor Lachlan and his second wife Elizabeth are examples of the second. Both were very interested in architecture, with bringing several pattern books with her to NSW in 1809, books that provided the basic designs for early construction.

Macquarie himself was very much the builder whose grand ideas could outrun both practicality and indeed the financial patience of the Government in . In addition to the works he commissioned, he became dissatisfied with the ramshackle layout of and had new town plans drawn, creating the layout that exists today. By the time he resigned as Governor in 1821, he had left an indelible imprint on the still young colony.

But what of architects with Northern or connections? Arguably, the one who had the greatest impact on the built environment as we know it today was James Barnet (1827-1904) 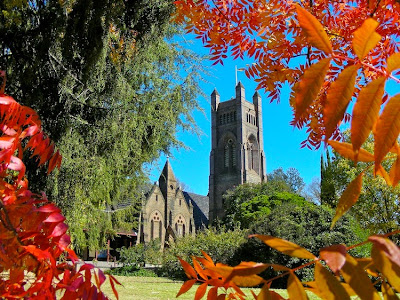 Barnet was the NSW Colonial Architect from 1862 until 1890. During the first expansive period of his career, he used growing Government revenues to build significant public buildings. Northern examples include the customs house, post offices in places such as , Kempsey and Grafton and the Inverell court house.

His post offices came in a variety of shapes and sizes, but always had an open loggia which provided a meeting place and shelter for the post boxes and a large clock. His court houses usually assumed a monumental and classical form designed to enforce the majesty of the law.

So far as Armidale is concerned, the city is something of an architectural gem because of the varying styles concentrated in such a compact area. However, it is the work of Canadian born architect John Horbury Hunt (1928-1904) with buildings such as Booloominbah or St Peter’s Cathedral that give the city its most prominent place in the architectural history books.

Posted by Jim Belshaw at 5:30 am No comments: Links to this post

History revisited – the kitchen becomes the heart of the household

I am not sure how old we were. We must have been young, for we travelled in the Morris Minor that was Gran’s car, although it always seemed to be driven by my aunts who were then living at home. In this case, Aunt Kay was going to see Great Aunt Sarah and brought us along for the ride.

I do not know how old Sarah was, although cousin Arnold might be able to tell me. Certainly she seemed very old to us. The house had a slab kitchen separated from the main house as many kitchens once were. While I can no longer remember all the details, I do remember how quaint and old fashioned it seemed.

Geoffrey Blainey in his fascinating study of early Australian domestic life, Black Kettle and Full Moon, notes that as late as 1850, less than half the dwellings in Australia had a kitchen. People cooked out doors or, if they had a sizeable hut, on open fires at one end of the room. Many huts had huge fireplaces running almost the width of the building. Cooking took place in pots or billies placed on or just above the open fire. 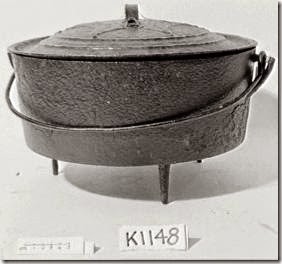 By 1850, the camp oven (image, Powerhouse Museum) was already a popular way of cooking. Essentially a small cast-iron box with a lid on top and often set on three legs, the camp oven could be placed in the open fireplace and ashes heaped over it, allowing for a more even distribution of heat. Bread could be cooked, puddings made or meat roasted.

As kitchens spread, they were (as in Sarah’s case) built separate from the house at the back, often linked by a covered pathway. They sometimes included the laundry, a store room and, in wealthier households, a servant’s room just off the kitchen, creating a back wing. You can still see signs of this configuration in some older houses.

This layout reduced the risk of fire, an ever present problem in colonial New England. It kept food smells away from the main house and, in hot areas, the heat of the constantly burning kitchen fire. In colder areas such as the high Tableland, it also made the servant’s room the warmest room in the house.

From the 1880s, houses even in the bush began to include an interior kitchen. The reasons for this shift are unclear.

Blainey surmises that it may have been due to acclimatisation. People were more willing to accept kitchen heat in summer, less willing to accept winter cold. My own feeling is that the shift was simply practical, it was easier to get hot food to the table.

The shift to an inside kitchen combined with another change from the 1860s, the introduction of the kitchen stove in place of open fire and camp oven. This greatly aided cooking while reducing the risk of fire.

The new kitchen and especially the kitchen table had become the heart of the household, a central workplace and point of family gathering.

Posted by Jim Belshaw at 9:03 pm No comments: Links to this post