So far, our journey through the life of Captain Hugh Frewen has taken us from America in the gilded age, through the courts of Europe past the Wyoming cattle boom and then Nigeria, followed by the killing fields of Gallipoli and the Western Front.

Now the next stages in our journey take us to Australia via Iraq.

The war had added to Frewen’s restlessness. He had a knack of finding himself in complex historically important situations. He was also what we would call today a whistleblower, one who saw what he perceived to be wrongs and who used his family connections to try to right things.

He was in Northern Nigeria at a critical stage in the formation of the colony of Nigeria. There he had raised concerns about British currency profiteering with his father, leading to the establishment of a committee of inquiry.

At Gallipoli, Frewen had raised his concerns about certain aspects of British leadership with his cousin Winston Churchill, then First Lord of the Admiralty. Now the pattern would repeat itself in Iraq.

Frewen came to Iraq on the staff of Lieutenant-General Sir Aylmer Haldane, the British commander in Mesopotamia. There he found himself almost by accident as Special Services Officer in Mosul following the sudden death of his predecessor. .

Here for a little while did I contrive
To measure wits with Oriental wiles
(my predecessor had been burnt alive).

There is some ambiguity about Frewen’s role in Iraq. 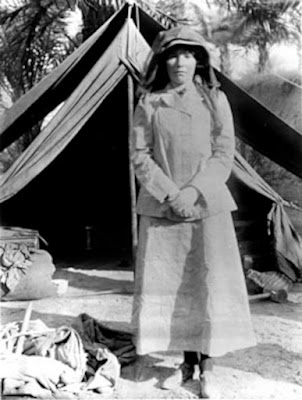 English blue stocking: Gertrude Bell, Babylon, 1909. She regarded Hugh Frewen as naive, inclined to speak tosh. Frewen had a different view.This is the sixth in a short series on the life and times of Captain Hugh Frewen.

Writing much later, Frewen’s autobiographical notes had an understandable tendency to centre on his own role. This contrasts with the views of Gertrude Bell, the English writer, traveller, political officer, administrator and archaeologist who played such a key role in the establishment of the kingdoms of Iraq and Jordan,

Bell met Frewen in passing when he was a member of I Branch. She thought he was naive and inclined to speak tosh, an example of the way that Britain was wasting money in Iraq!

What is clear is that Frewen, like so many British of that generation including Lawrence of Arabia, fell in love with the Arabs and took their side. He also came to support and identify with Iraq’s King Feisal, “a truly regal personage”.

Frewen had a particular dislike for the British High Commissioner, Sir Percy Cox.  He was “tall, cadaverous, tight-lipped as a Spanish Hidalgo….straight out of the pages of Don Quixote”.

Frewen by-passed Cox, arguing to Feisal that Iraq must establish direct representation in London. This happened, but it meant that Frewen became persona-non-grata, moving yet once more, this time to Australia.

Posted by Jim Belshaw at 1:50 pm No comments: 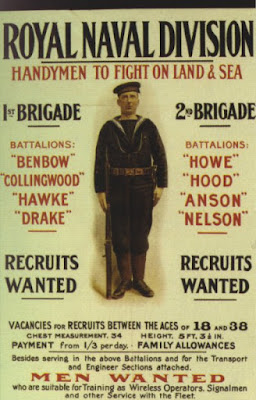 A Royal Naval Division recruitment poster from the Great War. Sub Lieutenant Hugh Frewen RNVR was one of their recruits.This is the fifth in a short series on the life and times of Captain Hugh Frewen.

The First World War broke out on 28 July 1914. In August, Hugh Frewen’s cousin Winston Churchill, now First Lord of the Admiralty, decided to expand the Royal Naval Division as a military force to support naval operations.

The new battalions were formed from navy reservists, surplus seamen and volunteer recruits. A new Royal Naval Division headquarters and training camp was established at Blandford in Dorset.

One of those who volunteered to join was Sub Lieutenant Hugh Frewen RNVR, training with the newly formed Benbow battalion. Following training, the battalion embarked for Gallipoli.

On 30 May 1915, Frewen landed with the first reinforcements at Cape Hellas, being promoted in the field to Lieutenant RNVR.

In early August, Frewen took part in the disastrous landing at Sulva Bay. Following the death of their company commander, Frewen with half the company made their way along the beach to join the ANZAC forces at ANZAC Cove.

At ANZAC Cove, Frewen was attached to the ANZAC forces in what appears to have been an engineering role, taking part in the construction of the light tramway which linked the Cove with Shrapnel Valley and Lone Pine.

I think that it was this period that helped form Frewen’s later interest in the possibility of moving to Australia.

In October, Frewen returned to his battalion at Cape Helles taking command of C Company. The following month, he was invalided with malaria after six months campaigning under almost continuous fire.

Frewen would go on to serve on the Western Front with the Royal Naval Division, finishing the war as a Captain, RNVR.

The couple had married on 21 February 1914. Two sons followed, Hugh and Jerome.

Now I think that Maria, a noted beauty, had become bored and perhaps frustrated with her husband. It also seems that Hugh Frewen had fallen in love with another woman.

The pair divorced In January 1922. Maria would marry and then divorce Marchese Strozzi of Florence before marrying Irish banker Benjamin Guinness.

On Hugh’s side, his restless spirit was about to take him in yet new directions.

Posted by Jim Belshaw at 7:15 am No comments:

Well, I am now in Armidale. I still don't have the internet working properly, that requires connecting to the NBN, but can access the internet using a hot spot created on the mobile. This is potentially very expensive, but meets my immediate needs.

After such a long delay in blogging, the move was creating distractions and delays long before the intensive move period, traffic to my blogs has declined greatly. I have to rebuild and that will take time.

I will write about the move, after all it has been a big and all consuming one, but for the moment I simply want to record that I am back blogging.

I look forward to a return to regular posting, to the on-going conversation with blogging friends old and hopefully new!
Posted by Jim Belshaw at 6:41 pm 3 comments: