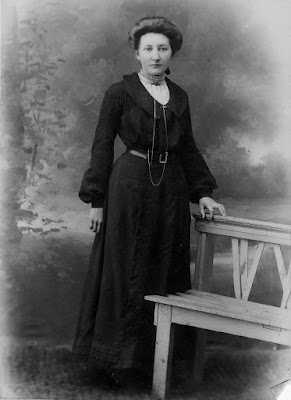 Pearl Goode around the time of her marriage to David Drummond. While quiet and shy, she fitted well into the small farming community around Oakwood.

This is the fourteenth in a series on the history of the media and especially the newspaper press in New England, the seventh column on the emergence of the NSW Country Party

The eye for detail revealed by David Drummond's observations of cooperative harvesting techniques around Armidale reflected his growing interest in farming practice. The lad absorbed the techniques he saw, sorting out in his mind those he would later follow.

In 1911, Drummond was given an opportunity to put his developing ideas into practice.

John Ewing, produce manager for the Pastoral Finance Association, had some spare capital and began thinking about purchasing a block of land. Ewing discussed his plans with David’s brother Morris who arranged for David to inspect the land in question.

Inverell, on the western edge of the Tablelands, had long been known as a fine farming district. However, in the absence of a rail link farmers were effectively limited to their local market by the high cost of transport.

This changed in 1902 with the opening of the railway line to Moree: Between 1904 and 1914 landowners with holdings within twenty-four kilometres of the new line sold at least part of their land to farmers. As part of this process Bannockburn, one of the district's oldest grazing properties, was subdivided and put up for sale.

The block Drummond looked at was 518 hectares of mainly arable basalt soil with a half kilometre frontage to the MacIntyre River. While undeveloped, it clearly had potential and Drummond recommended its purchase. Drummond was then offered the position of manager, an offer he eagerly accepted.

“From a weekly wage of 1 [pound]... and board and lodging, I became at 21 years of age Manager of 'Maxwelton' with a share in the wheat harvests”, he later wrote with some pride.

Drummond packed his goods into a 'spider' sulky drawn by a half-bred welsh pony and, with a six-month-old foal and a sheep dog attached, and returned to Maxwelton to begin development.

The work was not easy. The virgin black soil was hard to plough and weather conditions proved difficult. Still, by the end of 1912 Drummond could look on his results with satisfaction.

Settled, his mind turned to other matters. He had met the Goode family while working at Arding south of Armidale, John Goode had come to the district to search for gold on the nearby Rocky River goldfields, but had then preselected land at Arding and become a successful farmer.

Drummond asked for the hand of Pearl, John and Ellen Goode's twenty-five-year-old daughter. She accepted him and the couple were married on 11 March 1913 by Arthur Johnstone in the Methodist Church at Arding.

The newly married couple settled down to life in the small farming community centred around Oakwood, the village that had sprung up with the development of the farms. Pearl was quiet and shy, but also had the capacity to make friends.

Travelling by sulky along the black soil tracks, she and David joined in the social activities of the community, visiting, playing tennis, or attending the church functions that played such a key part in community life, building the links that would later draw Drummond into politics.