Just at the moment I am a somewhat bogged down on Aboriginal languages.

The NSW Aboriginal Housing Office has a rather useful map on its site showing one view of the distribution of Aboriginal languages in NSW. I generally focus on New England, but there are advantages in looking at a broader picture. Look at the map first: my comments follow afterwards. 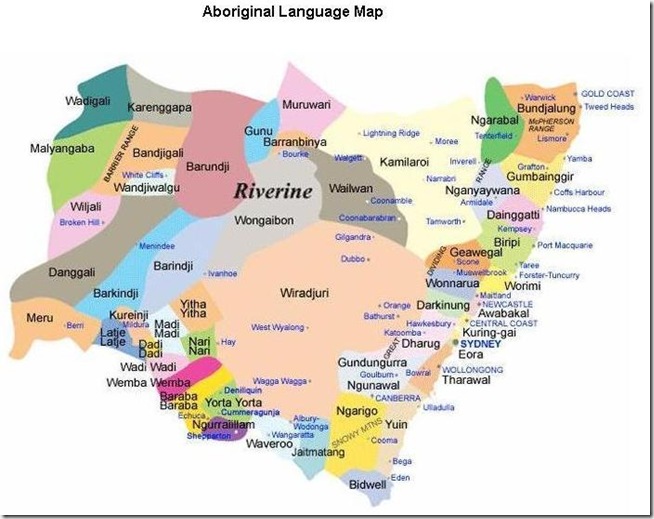 If you look first at the bottom of the map, you will see a heavy concentration of languages. These follow the Murray River, a very rich and densely populated Aboriginal area at the time of European colonisation.

On the far left, there are a range of languages - a patchwork quilt - occupying larger territories. These are the languages of the Darling River and western deserts. Like the Murray, the Darling was quite densely populated, although densities were far less. The Darling is simply a smaller river. The variety in the desert languages to the west of the Darling is a factor of distance and small populations; languages and dialects diverged because of distance.

To the right of the Darling, we find the two biggest language groups by area, the Wiradjuri and Kamilaroi. They occupied the river valleys flowing to the west from the Great Diving Range. These were quite rich territories; language expansion was facilitated by geography, people could spread.

Along the coast and adjoining ranges you have another dense distribution. Coastal language groups were linked to catchments. Many of the languages are linked: a coastal language, with another related language or dialect (the distinction between the two is a slippery one) occupying the headwaters. Tribal groups occupying the Tablelands areas between the Kamilaroi/Wiradjuri and the coastal languages were generally smaller in population because the environment was poorer. They were also squeezed.

The New England Tablelands, the largest tablelands in Australia, appears to have had just two language groups.