SHOW That WOULD PULL THE CROWD: the local show occupied a special place full of strange things. Jimmy Sharman's boxing troup was one such.

I have been trying to write a piece dealing in part with Armidale rhythms when I was a child. Not musical rhythms, but the rhythms of life. These were formed by the interacting rhythms of town, gown and country.

Town patterns included school and church, the shops, the local play, sport, the events such as the show. Country patterns included the rhythms of pastoral and agricultural life, the regular visits to town by country people, lambing and shearing. Gown patterns were set by the rhythms of life in the young university college and then university; the three terms still carrying their old English names; the examination cycle; the major academic ceremonies; the various university functions including games and fetes; and the academic visitors who had to be entertained and shown the district.

Within these interacting patterns, the local show occupied a special place full of strange things. Jimmy 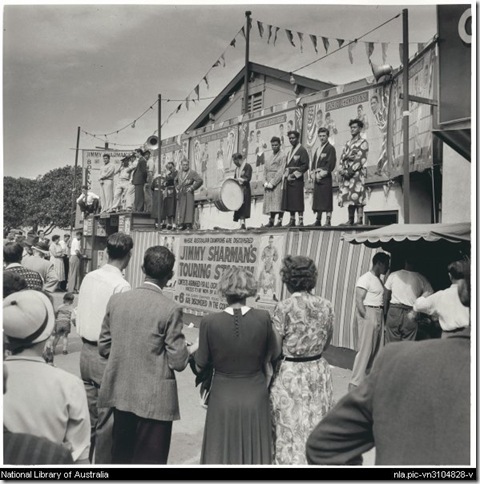 Sharman’s boxing troupe was one such.

The drum would start beating to draw the crowd. Those like my brother and I would be attracted by the noise, and come drifting across the rutted dusty ground towards the stand. There we would stand, while the spruker expounded the virtues of the fighters. "Come on, come on, come on. Give it a go. Survive three rounds and we will give you five pounds."

Each fighter would be brought forward and introduced to the crowd. "Surely some of you blokes can beat him. Three rounds, five pounds." The locals would hold up their hands and be called into the stand to be fitted out.

Inside we got near the ring, sat and waited on the hard seats while the dust motes drifted in the sunlight streaming down onto the ring. The fighters were brought out and introduced, the troupe fighter and then the local challenger. The bell sounded, and the fight began.

In today's terms it would all seem quite brutal, although we did not see it that way. It was just sport. It was only when fights were completely unbalanced that it became cruel.

Generally the locals were outclassed and it was over quite quickly. The local retired bearing his scars to the beer tent, there to stand in glory with his friends for giving it a go. However, there was one fight I remember that did not go according to plan.

The troupe boxer was a young, good looking, blonde bloke. He ran up against a very tough local who cut him to pieces. By mid way through the second round the troupe boxer's face was bruised and cut, his lips smashed. He kept going, but the crowd started to call for an end to the fight. It was no longer sport.

I actually saw a fair bit of boxing. Yes, I am aware of the health risks, but I am glad that I did see Jimmy Sharman's touring stadium before new regulations forced an end to the tent shows.