For Father’s Day, youngest (Clare) gave me Alwyn Torebeek with David Gilchrist, Life in the Saddle: Adventures of the Legendary horseman the Kokotunga Kid, Michael Joseph, Melbourne 2011). My family tease me sometimes because I can always find a New England connection. This case proved to be no different!

Investigating the history of rodeo in Australia, I found that on Thursday 28 March 1946, a group of bushmen had gathered at the Imperial Hotel in Maitland. They had important business to consider, the formation of a new association, the Northern (N.S.W.) Bushmen's Carnival Association.

By that Thursday in 1948, events based on riding or stock activities including roughriding and camp 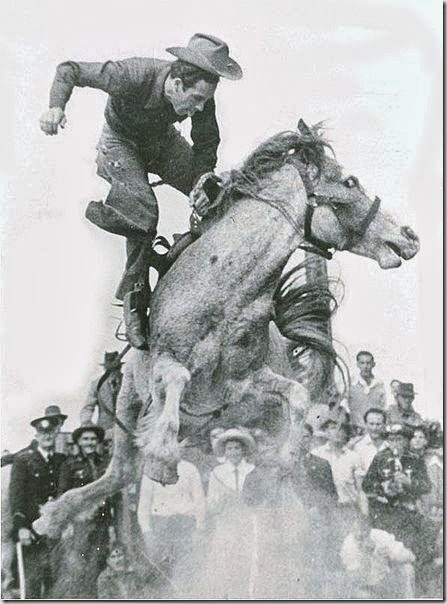 drafting had a long history. During the 1880s, newspapers were recording Victorian roughriding events, included rough riding and bullock-throwing. In 1885, the first formal competition involving the uniquely Australian sport of campdrafting was held at that year’s Tenterfield Show.

The first draft was not held in the ring, but just outside the Tenterfield Showground on a vacant area. One of the competitors, Clarence Smith, a cattleman and horse breeder from Boorook Station, drew up the rules that remain the basis of the sport today.

From the 1890s, there were many Australian and some international Wild West shows travelling the country. Bushmen's Carnivals, the Australian equivalents of American rodeos, originated in Northern New South Wales in the 1920s and were well established by the 1930s. In 1930, Warwick, Queensland added the American-style contests of clowns, ropers and trick riders

The Americanisation of language and later equipment that had begun to take place did not please all. By the mid 1930s Mick Bruxner, the Member for Tenterfield and NSW Country Party Leader and Deputy Premier, was complaining at the way that the popularity of American westerns seemed to be affecting the language surrounding bush events.

Bruxner’s cousin was the noted Australian film maker, Warwick born Charles Chauvel. Annoyed by the dominance of American films and the pernicious effects on the language, Bruxner persuaded the NSW Government to attempt to introduce quotas requiring NSW cinemas to show a certain proportion of Australian films. This first ever Australian content rule seems to have failed, although the specific reasons for that are unclear.

In some ways, the period from the end of the Second World War until the advent of television marked the peak of rodeo and bush carnival activities. These were massively popular events in country Australia. Still, they remain popular with the smell of the dust and the horses, the noise, the sudden sharp excitement.

hey nice post meh, I love your style of blogging here. this blog reminds me of an equally interesting blog on my reading list which is http://danieluyi.com Personal Improvement Blog .
keep up the good work meh and also, please visit my blog and drop a comment even if it's a simple "nice post" reply.