I have a rather special book on my shelves. Called simply Armidale, it is number 21 of a print run of just 78. It is clearly a semi-commercial publication, for it carries advertisements at the back. But it is also quite a sumptuous book. 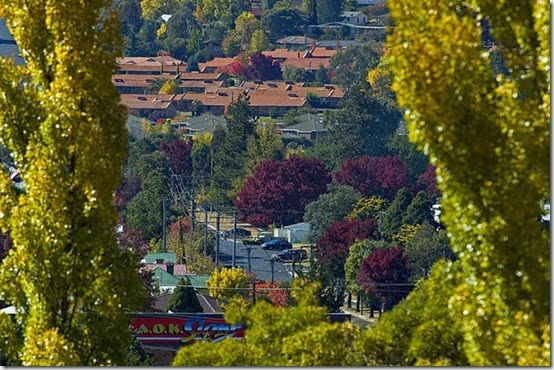 It has a velvet cover, glossy pages with full colour reproductions of paintings from the Hinton Collection carefully separated by tissue paper bound into the book and many photos of Armidale scenes. The printers are Reg G Pogonoski Pty Ltd of Newcastle whose proprietor proclaims himself as a proud Armidalian.

What is the book? It is the limited edition of the book published in 1938 to mark the 75th anniversary of the proclamation of Armidale as a municipality.

In some ways, it is a triumphal book, the story of a small city secure in itself, confident of its achievements, proud of its progress.

Harold J Robinson’s newly rebuilt Tattersall’s Hotel proclaims that it is equipped with every modern convenience: electric light, steam heated bedrooms, air conditioned throughout. Indeed, by then standards, it was a quite a luxurious establishment, a place well suited for visiting parents coming to see their children at school.

Many years later, I remember sitting an armchair in the lounge at the front, waiting nervously to meet a girlfriend’s parents for the first time. Even then, it carried the trappings of its past glories.

To mark the seventy five years, a special Back to Armidale committee has been formed to organise the festivities. Chaired by F K Lamb with P N Harrison as secretary and W S Forsyth as Treasurer, the committee has no less than 82 members representing every section of the city. Mayor W H McBean acted as president of the celebrations themselves.

What did the local citizens then consider worthy of celebration? In many ways, current residents would find the themes quite familiar. There is a general history section prepared by students from the Teacher’s College, along with special sections on Captain Thunderbolt and the story of the newspaper press in Armidale. The local homesteads are featured, as is the Council and its aldermen.

The largest sections in the book are devoted to education, churches, public institutions and societies and to sport. What were the main sports in 1938? Seven are featured: shooting, racing, rugby league, rugby union, cricket, hockey, golf, bowls, tennis, and fishing.

I see that Rugby Union had fallen into decline, kept alive by the schools. Now the New England Rugby Union is being reborn, with the aim of running a full competition in 1939. That happened, with the New England University College fielding its first team coached by the New Zealand born Jim Belshaw.

Throughout the book, black and white photos display the beauty of the New England countryside. “See the Beauties of New England”, proclaims Charles Purkiss. “Travel by Woodward and Purkiss Motor Services.”

Beautiful then, just as beautiful now.

The photo of Armidale in Autumn comes from Gordon Smith.