End of an Era. The Newcastle wool sales came to an end last year after more than ninety years in operation. Jim Belshaw explains how the sales began in the 1920s to help Northern farmers.

Tuesday 19 February 2013, Newcastle. The last wool sales had begun. For the last time, the buyers, brokers and graziers gathered together. Unlike other centres where selling had become remote, the mob of woolgrowers and buyers who relished travelling to Newcastle to see the collective clip had never wavered, propping up hotels, restaurants and business. It was their sale, a major social outing. 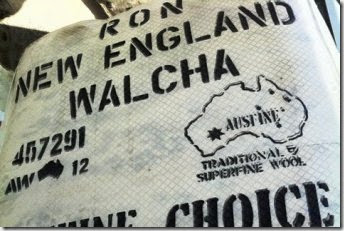 Barbara Morley had served the wool brokers and growers breakfast, lunch and dinner for 27 years. Now she was to don her apron for the last time, serving dinner for up to two hundred people, enjoying a last chardy or chat with all the familiar faces.

‘Country folk are just so unbelievable, real gentlemen and so respectful – I’ll miss them.’’

The story now ending had begun many years before. During the 1920s, Northern graziers experienced difficulties in selling their late cut wool because of congestion in the Sydney wool stores. Wool shorn in October or November could not be sold until the following March, creating a cash flow hole. The problem had become so bad that some growers were selling their wool from the shed, taking a lower price just to get the cash.

A small group (J J Price, A E Hunter and W E Tayler) decided that the solution was to open wool sales in Newcastle. Newcastle was a deep water port with a direct rail connection that finished on the water front. Tayler came to see P A Wright to seek his support and to ask him whether he was prepared to join the board of the new venture.

PA, everyone called him PA if not always to his face, was frustrated. He had sold his own large clip from the shed in 1927. A strong supporter of self government for Northern New South Wales, Wright believed that existing institutional structures impeded local development. He was also a supporter of direct action; those experiencing problems should act to fix them at once as best they could.

Wright listened to Tayler’s arguments. The need was clearly there. The concept was attractive. But would it work in a practical sense? There was a big gap between that embryo group and the practical realities involved in creating a new wool selling centre in the face of entrenched institutional and commercial barriers.

Wright was a methodical practical man. However, that was combined with curiosity, with a willingness to observe and experiment and the ability to see visions and to pursue causes with a dogged persistence.

As a practical man, he did his own investigation, visiting Sydney for talks with wool brokers. As a visionary, he became convinced that part of the solution to Northern problems lay in the development of Newcastle as an export port for Northern produce. It wasn’t just wool. Northern wheat growers were experiencing similar problems trying to export through Sydney.

After reflection and investigation, Wright decided to support the project and join the board. I will continue this story in my next column.