Musings on the latest Aboriginal DNA studies from Professor Cooper and his team, issues for New England studies 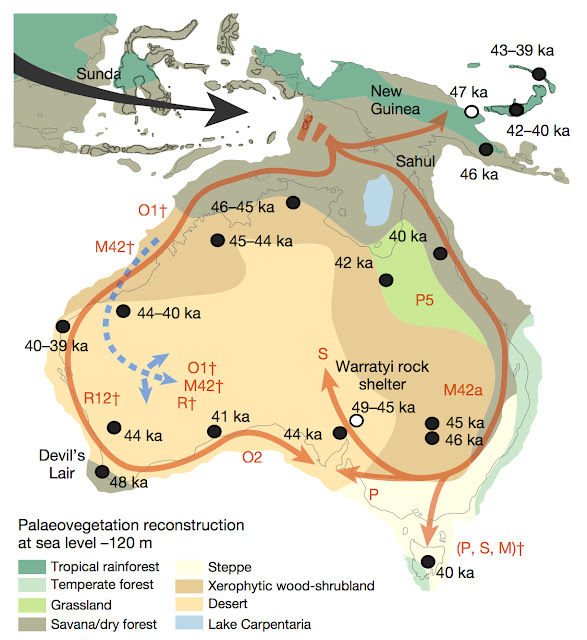 The latest  research published in Nature on Aboriginal DNA provides further light on our evolving understanding of the pattern of Aboriginal occupation of this continent. I haven't read the original paper, that will have to wait until I can access it via a library, but both ABC and ars technica have good coverage.

The researchers analysed mitochondrial DNA — which allows maternal ancestry to be traced — from 111 hair samples that were originally collected, with permission, from Aboriginal families who had been forcibly relocated to the communities of Cherbourg in Queensland and Koonibba and Point Pearce in South Australia.

The South Australian Museum's collection of more than 5,000 hair samples, complete with cultural, linguistic, genealogical and geographical data, came from the expeditions run by the Board of Anthropological Research from the University of Adelaide between 1928 and the 1970s.

I don't want to comment on the detail of the paper until I have read it, but a few broad observations.

The idea that the continent could be settled quite quickly by the descendants of an original small group seems feasible once one thinks of "quite quickly" in terms of multiple generations. The idea of a run or area capable of supporting an extended family or small group is central to our understanding of the pattern of traditional Aboriginal life.

Even if the Aboriginal population descended from a single small group, natural population expansion in a land unoccupied by other humans or major natural predators would have led to the spotting of new family groups into territory already known through exploration, groups that would in turn have spotted new family groups in a continuing process. Over 2,000 to 5,000 years (50 to 125 generations), this compounding process would have led to occupation over very large geographic areas.

One of the debated questions in Aboriginal history is whether occupation extended first down the east and west coasts and then expanded inland as compared to a broader pattern of dispersion. Despite the references to waves of migration down the west and east coasts, so far as the east is concerned, my present judgment is that the easiest migration routes would have been inland, to the west of the Dividing Range along the slopes and immediate Western Plains country.

I am cautious about the meaning to be placed upon the relationship between place and people as summarised in the ABC  heading "DNA confirms Aboriginal people have a long-lasting connection to country". I need to be very careful and precise here, for my concern is the popular linkage about very specific peoples and very specific places over long periods.

The broad problem can be stated this way. Given the enormous climatic changes that took place in Australia (Sahul) over the millenia, when was the modern connection between modern Aboriginal groups and their country established? Was it a result of the changes that came with the Holocene?

The first thing that I think we can now say with a reasonable degree of certainty is that recent DNA analysis suggests that modern Aborigines are directly descended form the original founding group(s). This is important because alternative models popularised by Joseph Birdsell concluded that there had been several waves of settlement to the Australian continent, with later comers merging with or even supplanting existing populations. There may still have been later admixtures, but the core DNA component suggest a continuity over the 47-50 or so millenia of human occupation of the continent. The considerable differences in Aboriginal populations revealed by both physical anthropology and DNA analysis can be explained by the combination of different settlement patterns with time and relative isolation including that created by the effects of climate change.

To go from this to arguing a connection between particular groups and particular areas is more problematic. I note again that I have yet to read the paper itself.

I would expect some connection. As environmental conditions worsened with the Late Glacial Maximum (LGM), groups would have been forced to shift. Particular areas may have become uninhabitable, or at least inhabitable only on an irregular basis, forcing people to move. The changes took considerable time, so people would have moved slowly to join other groups in moves linked to existing family and cultural links. This would have preserved, even reinforced, particular DNA structures. It would also probably have led to genetic divergence between groups now more separated. As conditions eased, land would have been reoccupied starting with the immediate, more familiar traditional territories. Oral memories of past connections preserved over generations would also have come into play.

I am especially interested in the history of a particular area. The latest research provides further tantalising clues on Aboriginal history, but I need to translate this into hypotheses about what happened in my area. For example, inland and coastal patterns are likely to be different. During the LGM, one can hypothesize that contact between coastal and western groups in New England would have been reduced as the Northern Tablelands became more inhospitable, more desolate. This suggests that the DNA of the two groups would have altered, accentuating differences.

Taking into account the paucity of recent archaeological work in Northern NSW outside rescue digs, I await the results of further DNA analysis with considerable interest. i need it to tell my story.
.
Posted by Jim Belshaw at 11:30 pm

My imperfect understanding is that settled local aboriginal populations moved East/West between Coast and Tableland rather than the North/South of our own settlement patterns. There appears to be obvious questions arising from your accompanying map, the earliest datings appear to be well to the South of the point of entry. Are those dates out by a sufficient margin of error or is it the maternal DNA that incorporates a margin of error sufficient for point settlement dates to be accurate. How does this history of settlement fit into the timing for the overall 'Out of Africa' hypothesis. Does it challenge it ?

Hi John and my thanks for your comments. I must emphasize I have not yet read the original paper.

Dealing first with the out of Africa hypothesis, DNA analysis published last year tended to confirm an early single out of Africa origin. I wrote some notes. I will find these for you and bring them up.

On the pattern of movements, there was certainly movement from the coastal valleys up onto the Tablelands. On the New England, there seem to have been Tableland language groups somewhat squeezed between the big coastal language groups and the Kamilaroi.

The evidence that we have for movement is part ethnographic, partly archaeological. Inland, you seem to have both north south and east west movements from the slopes, but only limited contact with the coastal groups. On the coast, there are north south movements within language groups as well coast to highlands up the river valleys.

The date position is uncertain. The more definite dates come from archaeological digs. Here we have a problem of what survives or not as well as technical dating problems. DNA based dates are more uncertain, based (as I understand it) on estimated rates of genetic drift. All this means that within any sets of dates you will have apparent outriders.

Finally, thank you for your questions. They illustrate the need for me to do more work and thinking!

Our first Australians have an amazing story to tell the world in my humble opinion Jim. Their direct ancestors must have had significant maritime skills to allow for their movement across the globe. Sea level variation isn't a sufficient explanation in itself. An Out of Africa datum of 50k before the present would suggest ancestors with bicycles to reach Australia in a sufficient number to meaningfully colonies the country. As ancestors travelled there was always the need to generate sufficient numbers to allow for a small community to separate and move on to establish new country leaving behind those already settled. When barriers to movement were encountered there must have been a meaningful pause whilst a way round or across was found and this could have involved development of an appropriate technology. We don't really have any idea as to what skills set left Africa with Out of Africa. I've found th following link an easy read and update.
http://www.sciencemag.org/news/2016/09/almost-all-living-people-outside-africa-trace-back-single-migration-more-50000-years

Hi John. Agree that it is a remarkable story. Have saved that link. Will absorb and come back with a more detailed comment