My present train reading has been Bill Gammage's The Biggest Estate on Earth: How Aborigines made Australia (Allen & Unwin, Crows Nest 2012). I have written two posts on the book on my personal blog (Train Reading - introducing Gammage's The Biggest Estate on Earth and Train Reading - environment, mental maps & Bill Gammage). In this post, I want to look at Bill's arguments in more detail.

The book centres on the way the Australian Aborigines managed the country. Its thesis is that the Aborigines actively managed country to the point that they modified it to suit their needs. The landscape that the European settlers found in 1788 was consequently not a natural but man made landscape.


The Europeans then affected the landscape in two ways, one recognised, the other not. Their stock and overall land management practices affected vegetation, soil and water flows: trees were cleared; soils became compacted; run-off increased, with significant erosion. These effects have been well documented, although I think that Bill would argue that some have been misinterpreted.

The less recognised impact lay in the withdrawal of previous Aboriginal land management practices. This resulted in re-vegetation in some areas, along with hotter bush fires that affected plants and animals alike. Animals that had been common in some areas vanished, other animals saw an explosion in numbers. The combination of direct European modification with withdrawal of Aboriginal land management affected every aspect of the Australian environment, including its very physical appearance.

The book also challenges previous scientific analysis that attempts to explain changes in vegetation patterns just in terms of changes in things such as soils and climates. Further, it does so by use of historical evidence. Conflicts here led Bill to devote an entire appendix to defence of his position in the face of scientific skepticism.

To set the scene for the analysis that follows, this dramatic painting by William Strutt shows the Black Thursday bushfires of 1851. Those fires burnt approximately 5 million hectares, or a quarter of Victoria; 12 lives were lost, along with one million sheep and thousands of cattle. Pause and think about the effects of such fires on the Aborigines had they occurred with modern fire frequency. They didn't, and that provides my entry point.

There is plenty of evidence to show that the Aborigines burnt the country. Early European records often refer to fires lit by the natives, including the use of fire to provide later green pick that would attract grazing animals such as kangaroos that could then be hunted. Clearly, those fires would have had some effect on the environment. Among other things, they would have kept fuel down, thus avoiding catastrophic fires of the Black Thursday type. Fires of that intensity would have wiped out entire Aboriginal communities either directly or through loss of food supplies. The Aborigines weren't dumb. They lived in and knew their country. They knew the risk of fire. However, Bill goes a lot further than this in his argument, for he argues that the Aborigines used fire to consciously modify and maintain country to suit their needs.

The evidence that he provides begins with the descriptions of the countryside as seen by the first Europeans. They saw a patterned landscape, one that puzzled them because they couldn't understand how the varying vegetation mix might arise. Somehow, it seemed random. They also saw a landscape that reminded them of parks at home, of noble estates. Here Bill does us a service because he attempts to attach meanings to words that held at the time, not as we would interpret them today. A park was a stretch of open ground bounded by trees that might contain trees, but where the undergrowth was clear. The word did not necessarily have either the highly manicured or, alternatively, wild connotations that might apply today.

Bill then goes on to argue that this pattern was a human creation. To support this, he looks at the pattern of Aboriginal life. In looking at Bill's arguments here, I want to put aside arguments relating to the Aborigines' emotional, cultural and spiritual connections with the land. Instead, I want to focus on the way they lived. 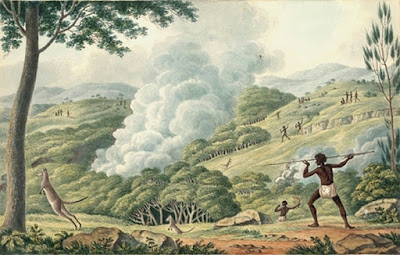 This somewhat stylised painting by the convict artist Joseph Lycett (and here) is entitled "Aborigines using fire to hunt kangaroos".

All our evidence suggests that the Aborigines moved across the landscape in family groups occupying defined territory or runs. They knew their own territory intimately because they travelled by foot. While the Aborigines generally lived in small groups, the evidence also shows that they came together in bigger groups for social, cultural and economic purposes. This included hunting.

In a pre-literate society, knowledge is passed down through the generations by oral instruction. If you live in a specific area and have done so for generations, you learn the country on which you depend for you livelihood. You know the plants and animals intimately, you know what they want to survive. Initially you learn by trial and error, but as you learn, the knowledge is passed on.

You come to a favourite camping spot, It's overgrown. The easiest way to clear is to burn. You come to your ceremonial ground and it's overgrown, light the bush. It doesn't matter if the fire spreads a little, for no-one will be hurt, while the effects of fire in food supply are likely to be positive, not negative. Here you know from practical experience as well as inherited knowledge just what conditions particular plants or animals require to thrive.

You want to extend the food supply? Then burn the nearby forest to gain open ground. Hard to burn rain forest? Do so in summer on the margins.

Bill extends the concept by arguing that over long periods the Aborigines created what he calls templates, specific vegetation patterns created for specific purposes. Kangaroo traps are an example. You need open ground with feed to attract the animals. You also need specific geographic features that will channel the animals into the spears of the waiting hunters. Through trial and error over millennia, you learn and create the right patterns. Once created, you maintain and extend the desired patterns.

I am sure that Bill is right in a general sense. His broad conclusions fit with the evidence that I have seen, including that used in my original honours thesis all those years ago on the economic structure of traditional Aboriginal life in Northern NSW. There I actually addressed some of the questions that Bill did, including Aboriginal farming. However, what I had not properly addressed in my own mind was the likely scale of modification, including modification in the areas that I am writing about, nor had I focused sufficiently on the pattern of modification.

The pre-European Aboriginal population of the continent was probably something over 300,000 people. I estimated the Aboriginal population of Northern NSW at around 13,600. That was almost certainly an underestimate because of the impact, among other things, of small pox and other diseases that spread beyond the moving frontier. The archeological record suggests that Aboriginal occupation of the North deepened over the last 3,000 years; some have called this process intensification.

Aboriginal occupation of the land was not passive, nor was it static. I will write a little about this in another post citing evidence. For the moment, my point is that given the long period of intense Aboriginal occupation, it beggars belief that the Aborigines did not affect the landscape. This leaves open the question of the exact scale and pattern of the changes. Here my feeling is that Bill is closer to the truth than some of is apparent critics would allow.

If the Aborigines did affect the landscape, then it follows logically that their withdrawal from active land management must have had some impact. Again, the evidence that I saw in my original work led me to believe that it had, including re-growth in previously cleared areas. Again, Bill's work suggests that I underestimated the scale of impact.

Ignoring the broader implications of Bill's work to focus just on my own historical concerns, while Bill's analysis allows me to flesh out aspects of my own thinking on Aboriginal New England up to 1788, it poses a fundamental challenge in that I cannot assume that the the current environment broadly defined, one that I know so well, provides an accurate guide to possible past patterns. It clearly does not.
Posted by Jim Belshaw at 7:55 am

Congratulations. Pleased to know about your own thesis. I have also read this year The lamb enters the dreaming by Robert Kenny. This relates to Victoria but makes a suitable bookend to Gammage's work.

Thanks, Brigid.I don't know that Book. I will look it up.

I wasn't sure how best to get in touch with you via your blog.

I found your blog via Google when looking for people who are interested in Aussie history. I have an iPhone/iPad game based on real events that might be useful for getting older kids and adults interested in Australian history. I'm just testing the waters and would like your opinion on how suitable it would be.

If you have the right device and are interested in trying it out, please let me know.