Most Armidale people would know, I think, that the city was the site of the first tertiary institution in Australia founded outside a capital city. However, I suspect that few would know that it was neither the Armidale Teacher’s College nor the New England University College. It was, in fact, St John’s College.

English born, Arthur Vincent Green was elected bishop of Grafton and Armidale in 1894. During his seven-year episcopate he doubled the staff of the clergy, dedicated over eighty new churches and built a registry office and bishop's house at Armidale.

In 1898 he established a theological college, St John’s, to train future Anglican clergy. The College began with just four students in a single cottage. However, architect Horbury Hunt in what would be his last Armidale commission was asked to draw up plans for a permanent building. On 8 June 1898, the foundation stone was laid with the inscription “To the Glory of God.”

At this point I do not know who the first Warden of the College was. The first Warden I have found reference to is Arthur Henry Garnsey. Born in 1872, Arthur was educated at Sydney Grammar School and Sydney University. There he graduated with first class honours in Greek, captained the university cricket team and also won a 'blue' for tennis. Garnsey’s sporting interests probably had an impact on the College, for among the few photos I have found of St John’s Armidale are shots of the College’s tennis and rugby teams! 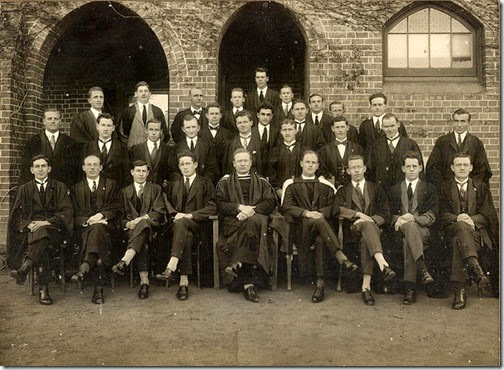 Garnsey was appointed Warden of the College in 1906. In 1914 he was made canon of St Peter's Cathedral; he was also examining chaplain to the bishops of Armidale from 1916 to 29.

The College’s original aim was to become the training centre for all Anglican clergy in NSW and Queensland. This was not done, but Garnsey continued the College’s development, before leaving in June 1916 to become Warden of St John’s at the University of Sydney.

There is then another gap in my records. However, in 1918 the Reverend E H Burgman was appointed as Rector. The following year, A P Elkin was appointed as a full time teacher and Deputy Warden. Now we have two people in Armidale that would become major figures in the history of Australian thought.

Under Burgman’s leadership, the College expanded its influence. Then came events that I don’t properly understand. Perhaps Armidale was just too far away. Perhaps, as has happened so often, there was a loss of local vision. Whatever, the Bishop of Newcastle offered the College a new site and greater support. In May 1926, the College relocated from Armidale to Morpeth in the Hunter Valley.

From an Armidale perspective, the loss was significant, although the College’s presence had helped add to the city’s reputation as an education centre, aiding the foundation of the Teacher’s College in 1928.

From a national perspective, the College in its new location would play a major role in the intellectual debates of the 1920s and 1930s.