History revisited – remnants of a past era

Just outside one of the doors leading into Booloominbah from the courtyard is a very strange piece of brickwork. Built in an L shape, it has no discernible purpose.

When brother David and I were very young, Dad’s office was in Booloominbah just down the corridor and up the stairs from that doorway. We often played there, standing on and jumping off the raised L. However, we had no idea what it was for. It was just odd.

I finally found out what it’s purpose last year,. I had come up to Armidale for the gala seqesquicentenary production of Armidale – Our Town. A friend came with me, and on the Saturday morning we decided to do the Heritage tour. Our guide was Werner Schwarz.

At Booloominbah, Werner explained that the brickwork in question was a sidesaddle dismounting point for the ladies of the house and their female friends. They could slide of the horse in a modest fashion, then step down to ground level.

While there are depictions and descriptions of women riding aside on Greek vases and sculptures and in some of the Celtic stories, by the Medieval period in Europe all women rode aside. This was partly the nature of women’s clothing with its many skirts, more a matter of modesty.

This modesty was deeply ingrained. In the middle of the 19th century on the Macleay, Ellen Kemp and her sister were skilled bush riders, but it was always sidesaddle. “Not astride! No – we would not even let the gum trees see us in that position.”

The first sidesaddles did not allow women to control their horses, requiring them 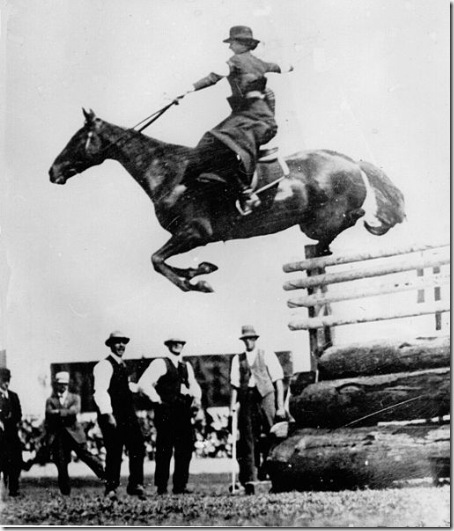 to be led. This was impractical. Women did ride and needed to control their own animals. However, progress was slow. According to Wikipedia, the first reasonably practical sidesaddle was not developed until the sixteenth century.

The modern sidesaddle was invented in the 1830s by Jules Pellier. This was revolutionary, for it allowed  women to ride at a gallop and to take part in equestrian events. At Sydney’s Royal Easter Show in 1915, Yarrowitch woman Mrs Esther Stace set a world record for a sidesaddle jump of 6’ 6” (1.98m).

Mrs Stace’s jump marked a high point in more ways than one.

As early as 1909, the Mullumbimby Show permitted women to ride astride for First Class events. Now in the turmoil of war and the social changes that marked the first decades of the twentieth century, astride riding swept the sidesaddle aside. With it went memory of the ladies’ dismount point at Booloominbah.

Today, sidesaddle riding has enjoyed a modest revival, keeping alive that feature of women’s life over so many centuries. We can still see for ourselves, to visualise what this part of life must have been like.

To Jim Belshaw
Do you know if there is a written full Biography (book) on Esther Martha Stace the side saddle Equestrienne? Looking forward to your email reply.

Hi Madonna. I don't think so. Certainly I haven't found anything. Interesting lady.