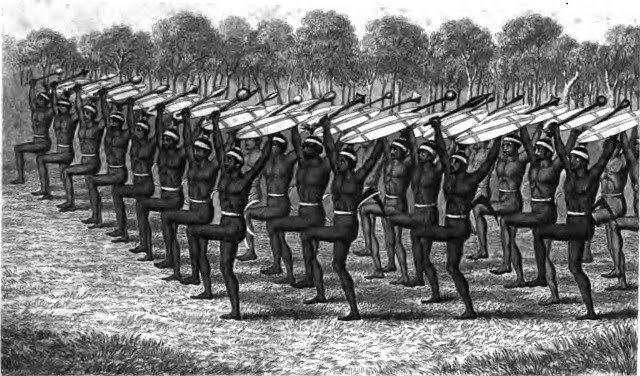 Macleay Valley, dance of defiance 1842: Language covers all aspects of life. As life changes, so does language.This is the fifth in a series discussing the deciphering of the mysteries of New England's Anaiwan or Nganjaywana Aboriginal language.
Column one The man who cracked the Anaiwan code
Column two Terry Crowley's hunt for traditional languages
Column three Northern Tableland's rich tapestry of traditional languages
Column four Pioneering Anaiwan language studies

In an earlier column in this series on the story of the Anaiwan or Nganjaywana language, I mentioned that languages change over time. They change in vocabulary, in pronunciation and in grammatical structures.

The Aboriginal group or groups who first entered Sahul, the name given to the larger continent combining and when sea levels were much lower, spoke their own language. That language covered the full domain of life, from the detail of daily living to the ceremonial and religious.

As the Aborigines spread across their new continent, new words had to be added or existing words altered to cover the new things they found. They preserved their history through song and dance, through yarns told around the campfire, but inevitably things were lost as new experiences and ideas were added.

The very sound of language changed slowly over time and space. Part of this was due to language drift, the way language changed from one generation to the next over multiple generations, part to the addition of new words that were fitted in but still changed the way that people spoke.

We will never properly understand the pattern of these changes over the long millennia of Aboriginal occupation of the continent that would become . However, linguists have developed rules that assist them to understand the ways in which languages might have changed.

In his work untangling the mysteries of the Anaiwan or Nganjaywana language, Terry Crowley attempted to do two things.

First, he looked at the relationships between Anaiwan and the surrounding languages to define rules that might explain difference and relationships. In doing so, he was able to establish that Anaiwan fitted within the general corpus of surrounding Aboriginal languages and that it was most closely related to the coastal languages and especially Djangadi or Dhanggati, the language of the Macleay Valley.

This left him with a second question, why did Anaiwan vary in such a way as to become an apparently different language? This problem was especially complicated because of the apparent connections between the Djangadi and the Tableands’ languages further north,. Why was Anaiwan, the southern language, so different?

put the problem this way

The phonological changes in Anaiwan must have taken considerable some time ago to allow other Tablelands’ languages to add so much non-coastal material, to allow for the shifts in pronunciation.

The answer, he suggested, may have lain in the existence of a secret or mystical Anaiwan language, one independent of but parallel to the main language, that reduced the need for Anaiwan to borrow from other languages.

This secret language may well have existed, Mathews refers to it, but is not (I think) the most logical explanation. Rather, I think that the answer lies in geography and the pattern of climatic change.


I will explain this in my last columns in this series.

I always think first Geology Jim, then Geography as the two building blocks for understanding the Biota of any given area and that includes human settlement. What linguistics appears to be telling our generations is that the Tablelands were first settled via a move inland from the Coast using the Macleay River catchment as the preferred access. The Tableland wasn't settled from the West even though far Western NSW was long settled. Would be interesting to know if that is a unique occrance or a repeat to be found further North via the Clarence/Richmond catchments and further South with the Hunter catchment. How Australia was first settled could tell us a lot about the human journey to Australia, what the environmental preferences were of those first peoples for moving into New to them territories.

Hi Johnb. I agree with you on the importance of the two Gs. Oddly, I was writing on this today for my next column.

In looking at Aboriginal settlement on the New England Tablelands you have to break it into two parts, before the Last Glacial Maximum (LGM), post the LGM.

When Aboriginal people arrived on Sahul, it is fairly clear that they spread rapidly. While there are evidence problems, it is hard to believe from the date pattern that they hadn't reached Northern NSW by about 32,000 years ago. We don't have any evidence, but again it is reasonable to assume that Aboriginal groups were at least visiting the Tablelands.

There is an argument from Sandra Bowdler that these first settlers moved down the coast from Northern Australia. My feeling looking at the geography is that in the east it is more likely they came down western edges of the range or perhaps both. So the first Tablelands settlers could well have come from the west.

The LGM forced the Aboriginal population to contract. It is possible that remnant groups continued on the Tablelands in the harsh sub-alpine conditions, we have no evidence, but I think it more likely that the Tablelands were vacated although visits my have continued.

After the LGM, and this is what I was writing today, I think it most likely that resettlement came from the coast.