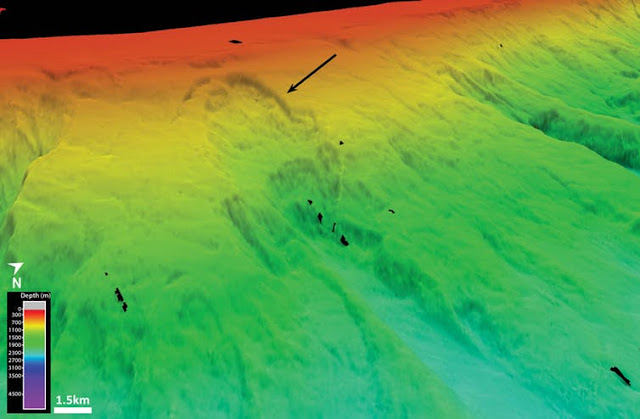 Underwater landslip on the downward slope of the continental shelf off Byron Bay. New research shows a large number of such slips, many of which have occurred in the last 25,000 years. These were within the period of Aboriginal occupation of New England, a time of great changes in sea levels.

Interesting article in The Conversation (11 December 2017) by Samantha Clarke, Hannah Power, Kaya Wilson and Tom Hubble, Scars left by Australia’s undersea landslides reveal future tsunami potential on evidence for sometimes large underwater landslides on the downward slope where the continental shelf  falls away to deeper water. This diagram from the article illustrates the process. 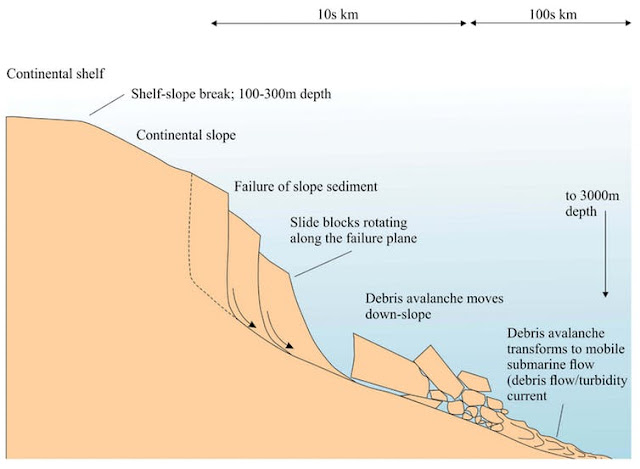 The focus in the article is on tsunami risk from future landslips. However, I was interested both in the undersea pictures and the reference to frequency over the last 25,000 year for this was a period of substantial sea level change.

As more water turned to ice, sea levels fell significantly, bottoming around 18,000 years ago at perhaps 120-130 metres below present levels. At this height, parts of the continental shelf slope break line could have been 20-30 metres above water.

The LGM began to ease around 15,000 years ago. The North American ice sheets melted. Around 12,000 years ago, the Antarctic ice sheets began to shrink. The Holocene with its higher rainfall and warmer temperatures had begun. The seas rose and rose again, reaching present levels around 6,000 years ago, a total sea level rise of 120-130 metres over 9,000 years.  .

The erosive effects as the sea rose onto and then submerged the continental shelf must have been very considerable. I wondered what the connection might be between the number of identified slips and this sea level rise. Whether triggered by earth movements or erosion, the bigger slips could have had significant localised impacts.

My own research focuses on the broader New England. At the moment, my best estimate is that the Aborigines reached the area perhaps 31-32,000 years ago. We do not have hard evidence for this, but the time is consistent with the pattern of dates that we do have. This means that the climatic and sea level changes described above are of considerable importance. However, we need to understand the local pattern of change if we are draw tentative conclusions about their impact on Aboriginal life. The absence of relevant local material has been a considerable frustration.

The Clarke et al article provides another little building block. In checking the latest material, I also found a 2010 paper that I had not seen before: Alan Jordan, Peter Davies, Tim Ingleton, Edwina Foulsham, Joe Neilson and Tim Pritchard,  Seabed habitat mapping of the continental shelf of NSW, Department of Environment, Climate Change and Water NSW, Sydney 2010. This focuses on the current seabed habitat along the NSW, but it contains some of the best local descriptions that I have seen of the shape of the continental shelf.

I have not had time to absorb this properly. I am referencing it here as a record for later study.

The Storeega slides are possibly the best documented Jim and also link into changing sea levels and the last glacial BP.
https://en.m.wikipedia.org/wiki/Storegga_Slide.
For Australia, it is as ever, find the evidence, if tsunami’s have arrived they will have left their mark. Oral tradition may also be there.

Hi John. I think that the link should be https://en.wikipedia.org/wiki/Storegga_Slide, although that's almost the same.

I had forgotten those huge slides. I think that the effects of the local slides off New England would have been far smaller, but a geologist might be able to estimate. I don't know what oral history survived.

I used your link to check the mapping for the area South of Yamba Jim to find an abundance of rocky reefs overlain at times by shallow silts and muds. Such geology I would imagine as unlikely to produce slides sufficiently significant to generate tsunami, but then I may be misreading the information. Offshore Macleay may be a better prospect as the reef structures became associated with particular features such as Fish Rock and Black Rock. Moving further South and continuous rocky reefs once again became the norm. Given the variation in sealeavels the majority of these rocky reefs must have been exposed at some point. The evidence suggests that these reefs extend to the edge of the Continental Shelf so we might have to look further afield for tsunami sources affecting the Mid North Coast’s coastal plains. The Macleay seems to be the critical link whereby the Coastal impacted the Tablelands.

Very interesting. I will have to look at those maps properly over Xmas, John. Probably of more importance than the tsunami question, is what the maps tell us about possible changing environments.

Without bogging down, if the Aborigines arrived in the North say 30,000 years ago with a sea level 50 metres below present. That level had been in existence for a while, so a coastal/estuarine environment would have formed somewhat to the east of the current coast. Then came the LGM. The sea level retreated a further 70-80 metres. As it did so, the previous coastal environment would have degraded to be replaced with a new once the seal level fall stopped. The new environment took time to form.

Its been suggested that the limited size of the continental shelf in many place and its rugged slope meant, ignoring climatic variations, that it was inherently less attractive than that it replaced. So the pattern along the coast is important. The only relevant site we have is Wallen Wallen Creek on North Stradbroke island. From memory, that was cc22,000 years ago. The view is that this was a camping site for people moving onto a coast that was then 12-20k further east.

The rising seas created a new western moving coastline. At highstand, sea levels would have been perhaps a metre above present levels. With the Holocene warmer weather and higher rainfall, the rivers carried greater volumes of sand and silt. At hightstand and then the subsequent slight fall in sealevels, the rivers created deltas. Kempsey which have been on the coast now becomes inland as the Macleay delta was formed.

The pattern is going to vary along the coast depending on local conditions such river size and the size and configuration of the coastal shelf.