This note briefly follows up on some of the issues I mentioned in Understanding the impact of sea level change in Aboriginal New England - a note.

In a comment on the post, JohnB referenced the three Storegga Slides, considered to be among the largest known landslides. Wikipedia states that they occurred under water, at the edge of Norway's continental shelf in the Norwegian Sea, approximately 6225–6170 BCE. The collapse involved an estimated 290 km (180 mi) length of coastal shelf, with a total volume of 3,500 km3 (840 cu mi) of debris, which caused a very large tsunami in the North Atlantic Ocean. In Scotland, traces of the tsunami associated with the last slide have been found, with deposited sediment being discovered in Montrose Basin, the Firth of Forth, up to 80 km (50 mi) inland and 4 m (13 ft) above current normal tide levels.

The Australian slides referred to in my note appear smaller, with the biggest one described as "several tens of kilometres across."  That would still have had a significant if more localised effect.

Climate Change and the Making of Britain. 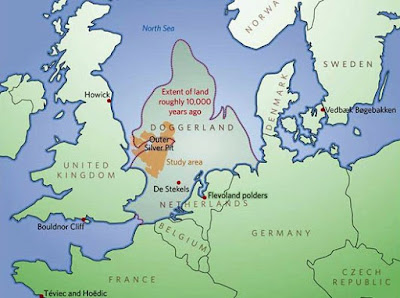 The last Storegga slide may have marked the final end of Doggerland (and here), the landbridge connecting England and the European mainland.

An brief article by Tate Greenhalgh and Lisa Hendry (The making of an island, Natural History Museum, 15 December 2017)  traces the interaction between climate, sea levels and Hominin occupation of what are now the British Isles over 950,000 years.

It's very simplified, but it is easy to read and provides an overview of the scale of change.

It's a very interesting article because of the way it consolidates the current state of the research on the pattern of sea level change and the reasons for  local variations over the period from the lowstand during the Last Glacial Maximum through to the Holocene highstand and then the relatively slight fall to the standstill sea level around the present level. It fills another gap in my research.

JohnB wondered if memories of landslip induced tsunamis might be found in Aboriginal oral history. I don't know. However, in an earlier article in The Conversation ( Ancient Aboriginal stories preserve history of a rise in sea level, January 13,  2015) by Nick Reid  and Patrick D. Nunn concludes that the memory of the impact of the sea rise was preserved in Aboriginal oral tradition.
Posted by Jim Belshaw at 8:48 am

Chris Stringer has given a link Jim that details similar settlement progressions from climate change over time and just how significant sea level change can be.
Chris Stringer Retweeted
NaturalHistoryMuseum
@NHM_London
·
15 Dec
Britain's human story extends back nearly one million years. Discover the timeline of ancient humans in Britain and see maps showing how the changing coastline affected the presence of humans
https://t.co/8OPLQ3gguS?amp=1

Afternoon, JohnB. The story in the Stringer link is the one referenced above.