Architectural keys to the past 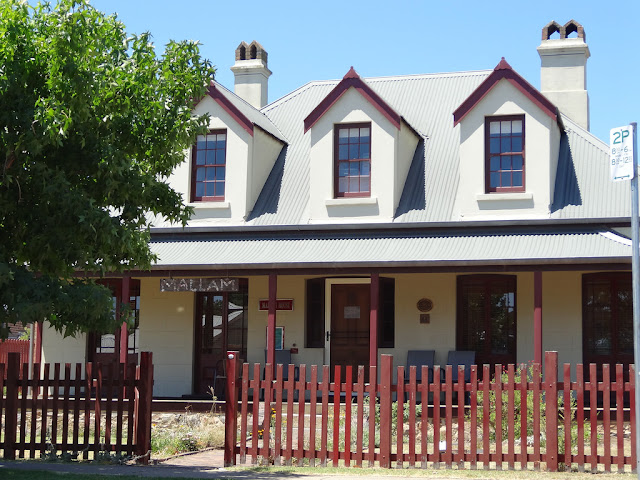 Mid Victorian finery: Mallam House was built in 1870 for Henry Guy Mallam, one of Armidale's pioneer chemists and druggists. This post marks the start of a a new series on New England's built landscape and architecture

The past lies all around us in the form of the built landscape. We see it, but then we don’t because it is so familiar to us.

Each period since European occupation of the land has been marked by different architectural styles, by different building forms that vary depending on the time built, on purpose and on available materials, on economics and available technology, on fashion and sometimes fad.

There are similarities in the built landscape across the broader . The old bank buildings or post offices, for example, are instantly recognisable, sometimes surviving as symbols of a more optimistic time. However, there are also differences that reflect differences in physical, human and economic geography. The architecture of the is not the same as the Tablelands, that of is different again.

The built landscape is constantly reinvented through a process of destruction and reconstruction, of expansion and sometimes contraction. Sometimes elements survive as memorials to past hopes and expectations.

In 1970-71 when Robert Bryant designed stage 3 of the Old Boiler House at the , he did so as part of a broader plan for a northern residential complex. That complex was never built, swept away in the changes taking place in the university sector.

When gained autonomy in 1954 there were nine Australian universities. In 1970 that number had increased to 14. Then an explosion occurred: there were 19 universities in 1980, 25 in 1990, 39 in 2000. UNE’s focus shifted from expansion to survival in the face of fierce competition, leaving the Old Boiler House behind as a sign of things past.

There are different ways of classifying the architecture surrounding us.

We can classify it by period and style. Mallam House, for example, is Armidale’s best surviving example a mid Victorian fashionable house.

It was built in 1870 for Henry Guy Mallam, one of Armidale’s pioneer chemists and druggists, to service the high end rental market. Its first tenant was Bishop Timothy O’Mahony, Armidale’s first Catholic Bishop of Armidale.

We can, as with the old Boiler House, look at architecture in terms of the combination of style and purpose.

A very different example of Armidale’s Victorian architecture can be found on the western side of . Designed by architect John Sulman for the Australian Joint Stock Bank and completed in 1889, the building was intended to be functional while acting as a physical assertion of authority and respectability.

With this as introduction, over the next few weeks I will take you on a tour of architecture from the very ancient to the most modern.

Armidale's designs may differ from other parts of the country because of all sorts of reasons: a] there were specific architects who specialised in a limited geographical area or b] particular building materials were plentiful and cheap locally or c] some local patrons had very specific architectural dreams they wanted to replicate etc etc.

You are right... Mallam House is a gorgeous surviving example of a mid Victorian house in Armidale. But I am not sure how to explain its special qualities - a mixture of Dutch and very early American homes, alongside verandas between projecting bays?

I always find the adaptive design of Australian domestic architecture so welcoming, whether that has to do with the near universality of verandas and their welcoming shade and open doors I can't say, but welcoming they are. Yes their has very definitely developed a regional architecture that varies East to West and North to South over the distances of Australia. My eldest has just made the journey as a photo essay for those of us left at home as she travelled from Coffs Harbour to Cape Leeuwin and return and the adaptive architecture was plain to see. I am less certain that our own period is being as adaptively creative as the technology of the air conditioner is being relied upon to allow the creation of the flash box to live in. What is saved in building costs is a transfer cost to those who live in the box and have to pay the bills for the air conditioner. Very much looking forward to your series Jim.

You wrote: "Armidale's designs may differ from other parts of the country because of all sorts of reasons: a] there were specific architects who specialised in a limited geographical area"

Armidale and more broadly New england architecture does reflect regional architects such as Armidale's Hickson or especially the Penders from Maitland. Saumarez Homestead is an example of a Pender design.Obviously they were influenced by external sources. Then you have prominent architects from outside the region such as Horbury Hunt; Booloominbahis an example. Then you have houses designed by owners and builders such as Mallam House. The result is an amalgalm.

You wrote: "b] particular building materials were plentiful and cheap locally."

This is very true. Houses were built from available materials. So there is a weatherboard focus on the coast, then you have Armidale blue brick. The early homesteads were constructed from local timbers and from bricks made on the property. This creates a varied architecture.

Oh so true! This holds for both architect designed and individual designed properties. The striking Gordon Window at Booloominbah was created at White's request to celebrate a personal hero.

Mallam House is indeed a strange amalgam. It was built as an investment property. There is no evidence of architect involvement. Pender did design a later property for Mallam, but I know of no evidence that he was involved here. The dormer windows can be found at the much earlier Ohio Homestead near Walcha, they were a reasonably common feature, but the total combination is unusual.

I, too, find a fair bit of Australian architecture welcoming, John. Interested in your comment on eldest's transverse. What were the main differences as she saw them? Your comment on air-conditioning is interesting. A lot of emphasis is placed on energy efficient homes, but a lot of the modern homes appear to be designed to be independent of rather than accommodating their environment. Mind you, that may just be bias talking!

I do hope you enjoy the series, although not sure that I will be able to live up too expectations!

Hels identified important criteria for spatial difference in the local materials available, climate is another, the presence of and architecture of chimneys varies sufficiently to generate regional difference. Another relates to the period of first European settlement, Sydney, Adelaide and Perth can reflect these differences as they were all three discrete founding settlements separated in time. The founding colonists whether convict or free each left a different British hearth and in Adelaides history they also came from Germany. The philosophy of settlement also varied sufficiently to generate difference from the pure convict colony that was Sydney to the free colony under Wakefieldian systematic colonization theory founded in South Australia..
http://search.ror.unisa.edu.au/media/researcharchive/open/9915951887301831/53111908550001831.
As an off topic Jim you may be interested in this link.
http://siberiantimes.com/science/casestudy/features/extinct-denisovans-from-siberia-made-stunning-jewellery-but-did-they-also-discover-australia/

Morning John and thanks for the Wakefield link. A while ago I wrote something on SydneyvMelbournevAdelaide and the influence of the early architects on the differing built landscapes of those cities. Did a quick search to find it, but so far without success. Frustrating!

So we have a spatial dimension, a time dimension and a people dimension. As you note, chimney posts are an indicator. I don't know enough about chimneys!You have functionality and fashion in combination. One of the difficulties I have as a regional historian is to identify the varying patterns in my area, the broader New England, which tend to get submerged in broader city centric discussions on one side, to a much lesser extend local discussions on the other.

I hadn't seen that particular link, so my thanks. I saw another one on the same topic that I had planned to bring up, so will do both together!

I think the waters get muddied to some degree Jim by the intrusion of Statewide architecture from both the public and private sphere.. Police Stations, Post Offices could be examples from the public sector and Bank buildings from the Private Sector. The Commercial Banking Co of Sydney, Bank of New South Wales and the original Commonwealth Trading Bank of Australia all had their corporate style as I remember. The Housing Commission of New South Wales as another example has just popped into my mind. Local builders to a greater extent and architects, being fewer in number to a lesser effect. I think you must also allow for the significant effect of self-build until fairly recent times. Communication between regions being much more difficult for previous generations would also assist in the development of regionalism. What we now see as iconic buildings on the tablelands may well have originated from a trip to Sydney or even more unusual a trip Overseas. I find the built landscape a fascination as it tells you about both the land itself and the individuals of past generations.

You are right about the standardising influence of official architecture. A good micro example is Wallangarra railway station with its co-located NSW and Queensland platforms. The banks also did have common styles, especially later. CBA buildings are instantly recognised.

I hadn't thought of the Housing Commission example. Again, you are right. The different periods are recognisable. All this helps explain differences between towns as well as similarities, differences because buildings were built at different times.