New England: A journey through the built landscape 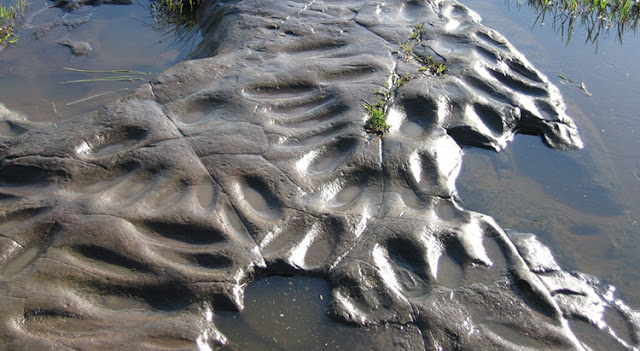 Mark of the past: Groves made by grinding as part of Aboriginal axe production. This required suitable stone and access to water. This is the second in my new series on New England's built landscape and architecture

We begin our journey through the New England built landscape and associated architecture in Aboriginal times with a question. If you could shut your eyes and return to New England in 1700, what would you see?

The physical landscape would appear familiar but also different. You would recognise major land forms, some types of vegetation, but then you would notice the differences.

Over the millennia, the Aborigines had modifies the environment to suit their needs and life styles. When the Europeans came with their stock, ploughs and axes, the landscape changed quite quickly.

The Tablelands, for example, were much boggier in Aboriginal times. The lagoons that now survive as remnants stretched along the Tablelands’ spine. Creeks such as Dumaresq Creek had high banks and deep pools. The pattern of trees and open space was different, altered by burning to meet Aboriginal needs.

All human societies have similar needs for food, shelter, protection and social interaction. They hold beliefs and values that allow society to function and explain their world. They invest time and resources in creating things that will make life easier and express their beliefs.

The Aborigines were no different. In addition to altering the landscape to meet their needs, they created a built environment that reflected available resources, climate and their culture, beliefs and life style.

That built landscape varied across Australia in ways we don’t properly understand. In Northern NSW, I suspect the first thing you would have noticed were the carved trees. They marked boundaries, graves and ceremonial sites embodying religious and ceremonial messages.

The next thing you might notice were the range of ceremonial sites including bora rings, stone arrangements and cave paintings. Some were of local significance, but others had a wider importance as centres for broader gatherings drawing visitors from long distances.

The stone sites are often found in high country including the Fall country, while the concentrations of cave paintings suggest sites of particular ceremonial or religious importance.

These ceremonial sites involved investment of considerable time not just to build and maintain, but to gather the food need to feed those attending.

The signs of Aboriginal industry and economic activity were also spread across the landscape.

Quarries such as the Moore Creek axe factory were developed to access particular types of stone, Axed had to be ground at particular sites, leaving distinctive markings on rocks. Over millennia, the production of stone tools created a lithic scatter across space, with special concentrations around occupation sites.

I will complete my discussion on the Aboriginal built environment next week looking at food production, communications and housing.