As the fear of revolution spread, private citizens began to arm, forming unofficial paramilitary organisations. On 18 February 1931, just nine days after Lang announced the Lang Plan, a private meeting of eight men at the Imperial Services Club in Sydney decided to form the New Guard. In less than a year, the Guard had grown to 87,000 men. 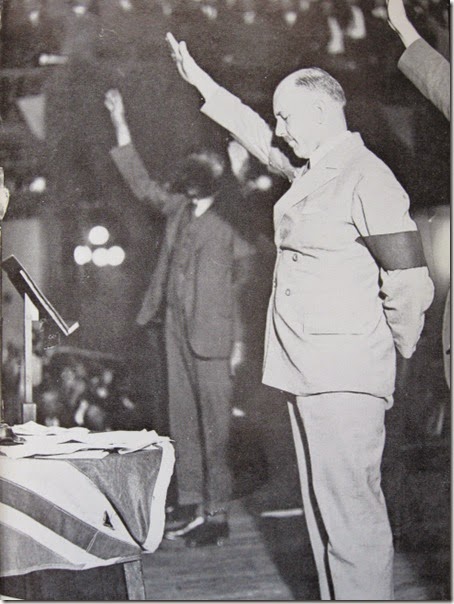 The Guard courted publicity, and this has given it a faintly comic air. However, it was arguably very dangerous; its strident rhetoric was associated with a well organised military structure, largely in Sydney, that might have allowed it to seize power.

Less flamboyant than the New Guard was the shadowy organisation known as the “Movement” to its members. Formed in November 1930 the Movement, later derisively called the Old Guard by its New Guard rivals, aimed to build up a disciplined force of 9,000 men who would only be called out in the event of a situation beyond police control.

While the strength of para-military forces in the North is difficult to gauge, it is clear that units were formed. However, although there appear to have been small New Guard branches at Lismore and Newcastle, the great majority of Northern groups were almost certainly independent or associated in some way with the Old Guard rather than the more efficient and extreme New Guard.

It is also reasonably clear that the Northern separatist leadership had at least had some knowledge of, if not connections with, the Old Guard. This is hardly surprising, given the number of ex-military officers connected in some way with the Northern New State Movement, for these formed the core of the Old Guard.

Nevertheless, whatever the strength or indeed affiliations of Northern para-military groups, their very existence was an important influence in the increasingly confused political climate of 1931 and early 1932.

In these circumstances, Page’s 17 February 1931 Glenreagh speech calling on the North to secede was not just a dramatic gesture. It was very close to a formal call to arms, a call for revolution.