History revisited – battling for self-government in the North

“In a fiery speech, Earle Page calls on the people of the North to secede.”

Glenreagh, Tuesday 17 February 1931. In a fiery speech, Earle Page calls on the people of the North to secede. 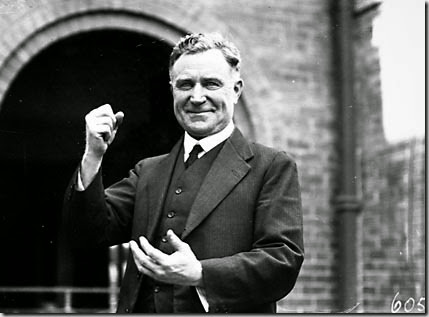 Eleven days earlier (6 February), the Premiers had met in Canberra to discuss a three year plan to rectify the economic situation. Federal Treasurer E G Theodore had suggested that a new and expansionary monetary policy should be adopted. NSW Premier Jack Lang, a bitter political rival, responded with his own plan, one that came as a surprise even to his own State party.

Under the Lang Plan, payment of interest to British bond-holders would cease pending re-negotiation of the loans on satisfactory terms; interest on all government borrowings would be reduced to 3 per cent; while the gold standard would be replaced by an undefined “goods standard.” What came to be known as the battle of the plans had begun.

Now in response, Page declared that the “people of the North seem to have no other course but to cut adrift from New South Wales. The people of Northern New South Wales refuse to have any part of or lot in this matter of default.” They would request recognition from the Federal Parliament as state that “would be organised under a Provisional Government pending adjustment of relationships and liabilities with New South Wales”.

This appeal, Page went on, would be “on all fours with the appeal of West Virginia” which was recognised by Abraham Lincoln as a separate state when it declared for the Federal Union.

Reaction to the Page speech was instantaneous, if mixed.

“Divorce is ever a tragedy and a confession of failure!”, wrote the newly arrived Anglican Bishop of Armidale John Stoward Moyes in an open letter to the Northern press. “I hope, gentlemen, that deep loyalty to the nation will forbid the people of the North to be beguiled by such sinister proposals”. Later Moyes, convinced at last that the existing system needed changing, would join the New State executive.

The Armidale Express, while sympathetic, warned that the proposed action was fraught with such grave consequences “that the irrevocable step must be taken only after the most thorough investigation”.

People at Murwillumbah had no such doubts. There the shops closed to allow attendance at a new state meeting which resolved that “we decline at all costs to continue to pay taxes and tribute to be spent by caucus-controlled Government.”

For his part, Lang immediately hinted at action for sedition, while the Empire Party, one of the new political groups that had sprung up in Sydney, also suggested that Page was guilty of sedition for promoting secession.

The stage was now set for the next dramatic phase in the North’s fight for self government. To understand this, we first need to look back at the economic, political and social stresses that developed with the Great Depression.