The fire ignited by Earle Page’s 17 February 1931 Glenreagh call for the people of the North to secede from New South Wales drew its strength in part from the now established desire for self-government for the North, more from the social and political tensions unleashed by the Great Depression.

At the outbreak of war in 1914, Australia’s population was just 4.9 million. During the war, 420,000 Australians enlisted, equivalent to 38.7 per cent of the male population. Some 60,000 died, others were wounded or became sick. Including deaths, wounded and sickness, the Australian casualty rate reached 64.8 per cent.

Many Australians returning from the front found readjustment to civilian life difficult. They provided a force for change that helped fuel many of the political movements including the rising Country Party and a resurgent Northern Separation Movement.

There were divisions on the right and left, fuelled in part by the rise of Bolshevism and the success of the Russian Revolution. The radicals looked to the possibility of change, the conservatives feared the overthrow of the existing order.

While the roaring twenties were nowhere near as prosperous as the label would suggest, economic growth was sufficient to contain the underlying divisions. However, that growth was patchy and built on unstable foundations.

Rising tariff protection encouraged expansion of manufacturing. In 1925-26 manufacturing employment exceed rural for the first time. Industrialisation was associated with and assisted by heavy expenditure on public works such as railways, electricity, roads and sewerage. The pattern of industrialisation and public works led to further growth in the metropolitan cities.

Industry responded by trying to control or even cut wages, which in turn led to continuing industrial trouble. Meantime, the rising drift of population to the city together with the cost squeeze placed upon primary export industries as a consequence of rising input costs began to fuel a new wave of country political agitation. 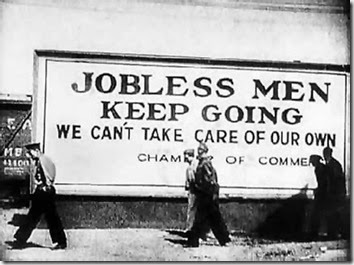 The perfect economic storm that now descended combined falling commodity prices with the closure of the London markets to new borrowings. Public works ground to a halt, while Governments were forced into a desperate search for solvency leading to Greek style expenditure cuts.

Thank you! The connection between the Northern separatist leadership and the Old Guard is fascinating. The number of ex servicemen involved in right wing organisations had caught me off guard, at least when the men had JUST been demobilised back in Dec 1918 and Jan 1919. I refer you to the 3 months of racist, right wing rioting in Brisbane in 1919 http://melbourneblogger.blogspot.com.au/2015/01/brisbane-1919-racist-red-flag-riots.html

I would have thought that the New England response to the Depression and to mass unemployment would have been more thoughtful than in Brisbane 1919, but wrong again :(

I hadn't caught up on that post yet, Hel. My thanks.

It's complicated. You had global change and then local reaction. The local reaction varied from place to place in a way not reflected in our current histories. It also varied over time.

From the depression of the 1840s to that of the 1890s Australia had a long period of economic expansion. Then came depression, great drought and war. A large proportion of the male population came home from war wanting stability and certainty on one side, change and a new Australia on the other. That helped spawn new political movements, including the Country Party.

The Bolshevik revolution was seen as opportunity and threat depending on where you stood in the political spectrum. The Brisbane riots were a reaction at one end of the spectrum.

Growth during the 1920s patched things over, but left divisions. Its hard for Australians now to realise just how many Australians had military training and access to weapons.

The anti-political movements spawned by the depression varied but had many common features, including especially a rejection of what were perceived to be the corruptions and failures of the existing system.

In NSW, the pattern varied between city and country and indeed across the countryside. The distinctive features in New England are that separation had become an accepted means of expressing discontent, while the leaders and their activists were actually the dominant establishment figures, constitutionalists. Their rebellion was against what they saw as the long standing oppression of their home territory, their land. That's a very different thing.

I haven't yet brought up the other columns in this series. I just ran out of time. There is actually a popular if partial novel covering some of this - it's called The Light Horseman's Daughter - http://www.amazon.com/Light-Horsemans-Daughter-David-Crookes-ebook/dp/B00580WULO