The period leading up to Page’s 17 February 1931 Glenreagh speech had seen some feverish behind the scenes activity.

On 30 November 1930, the President of the Farmers and Settlers Association at Murwillumbah had telegraphed Page asking that he and Victor Thompson organise a conference ‘with a view to declaring northern new state’. Page telegraphed back, promising to place the telegram before a meeting of the Northern members of the NSW Parliament.

Page had some difficulties in gathering the members together. It was not until 30 January 1931 that he met with David Drummond and Alf Pollack (the member for Clarence: photo) at Cremorne in Sydney to discuss strategy. Unfortunately. Pollack died suddenly later that day. 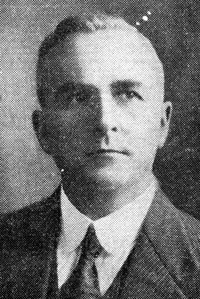 Politics is about people. The ideas and enthusiasm generated by the mercurial Page had considerable impact. As Deputy Prime Minister and Federal Treasurer he failed to create Australia’s first national superannuation scheme. Later, he would create the first national health scheme. Yet he depended on others to provide form and the supporting under-pinning required to make his ideas work.

A solicitor, Pollack had been to school at Grafton and Armidale before establishing his practice in Grafton. He had been a key Page lieutenant since at least 1915 when the dispute over the Helen river ferry launched the first twentieth century Northern separation campaign. Like Drummond, Pollack one was of those who provided practical grounding to Page’s enthusiasms. His death left a considerable gap.

A week after Pollack’s death, the announcement of the Lang Plan electrified the situation. On 13 February, Page came to Sydney to present his plans to colleagues on the action to be taken if Premier Lang carried out his threat to repudiate interest payments on the State’s overseas debt.

There were considerable reservations. Nevertheless, Page was given his head, while the decision was made to call a special meeting of the Northern New State Executive to be held in Armidale on 28 February 1931 to consider Page’s ideas.

While still technically an Executive meeting, the 28 February meeting was now being treated as a full Movement convention. That Saturday more than 200 delegates gathered to hear Page unveil his plans. The North should organise itself, Page said, ‘into a self-governing unit, demand recognition from the Federal Government on the ground that we intend to obey the Federal law and Constitution and pay our debts.’

In Drummond’s view, Page made an important tactical error her. The issues were so clear-cut to Page that he forgot that many delegates were hearing his plans for the first time. They were understandably cautious about a course of action so clearly smacking of rebellion. Finally, after protracted discussion and with some misgivings and private reservations, the delegates carried a series of resolutions that placed the Movement on the path that Page proposed. These included adoption for the first time of the name New England to describe the entire North.


Meantime, another movement was emerging that would create opportunities and challenges for the Northern separatist cause.