GAINING GROUND: NSW Premier Bertram Stevens (photo) tells Michael Bruxner he could have his referendum on self-government, but with decreasing support and continuing disputes over boundaries, Bruxner feared to put the matter to the test, a decision he would come to regret.

In October 1931, the dream of self government for seemed within reach. The various new state movements had combined to form the United Country Movement with the United Country Party as its political wing, while all the non-Labor groups had agreed that new states should be a key plank in their combined platform. 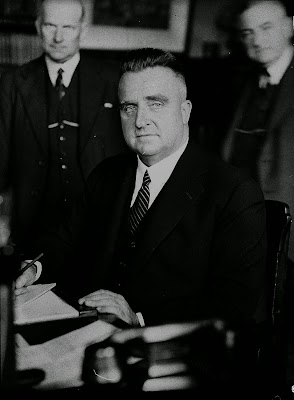 David Drummond, the member for Armidale, had played a deciding role in those complex negotiations.

Unlike Page, Hardy or (to a lesser extent) Bruxner, Drummond was not a mass agitator. He had deliberately turned himself into a good stump speaker, perhaps better than Page or Bruxner in terms of delivery and clarity, but he lacked the emotional spark that allowed the others to sweep a crowd before them. He was too concerned to explain, to appeal to the intellect rather than the emotions of his audience. In a very real sense he wanted to teach his audience just as he had so painstakingly taught himself.

These weaknesses were offset by a very major strength, his ability to give form and coherence to ideas and organisations. He was also trusted. In the chaotic conditions of the time, it was these strengths that were most needed. Drummond had played a key role in creating unity among the country movements. Now he would try to steer the cause through the next stages.

The December 1931 Federal elections saw the first setback. The unity that had been established among the non-Labor forces was swept aside in sometimes bitter campaigning, with Joseph Lyons able to establish a majority United Australia Party government in January 1932 excluding Page and the Country Party.

In NSW, the Governor Sir Philip Game dismissed Jack Lang on 13 May 1932. Early in 1931, the and Riverina Movement had been prepared to secede. Later, in changing circumstances, the decision had been reached that they would act if Premier Lang again breached the constitution.

Page saw in . told Page quite bluntly that if did secede, he might be forced to call in the army. The movement temporized. There was still willingness to act, but only in the right circumstances. Game’s dismissal of Lang ended that option. They had waited too long, something many would regret.

The NSW state elections of June 1932 saw Labor swept from power. On 23 August 1933, Justice H.S. Nicholas was appointed to determine the areas of NSW suitable for self-government.

After his earlier experience with his successful move to create the disastrous Cohen Royal Commission, Drummond was taking no chances. Not only was Nicholas carefully selected, but Drummond demanded answers in writing from Nicholas over his scope and role. The question of suitability was out. The only issue was definition of boundaries.

The first hearings were held on 18 October 1933, with Drummond organising the various movement responses. The fervour that had marked 1931 and 1932 was gone. Opposition emerged, with the position of the powerful dairy cooperative particularly problematic for it feared the loss of the milk market.

Nicholas reported in 1935. He found that two areas would be suitable for self-government as States within the Commonwealth of Australia, a northern region, and a central, western and southern region, with descriptions of the boundaries of each region listed.

NSW Premier Bertam Stevens told Bruxner that he could have his referendum on self-government. With enthusiasm down as well as continuing disputes over boundaries, Bruxner feared to put the matter to the test.

Bruxner would come to deeply regret this decision. But, for the present, the cause had ended. It would be ten years before agitation re-surfaced.

If you want to follow the story of the Northern or New England self-government movement, this is the entry post for the series.