Beringia and the settlement of North America - DNA results from Alaska

This post is a reference note. It's outside my primary focus, but is recorded for reference purposes in the ever evolving world of prehistoric man.

In a paper in Nature, Terminal Pleistocene Alaskan genome reveals first founding population of Native Americans that was published on-line on 3 January 2018, the authors' report on DNA analysis of Alaskan remains::


Despite broad agreement that the Americas were initially populated via Beringia, the land bridge that connected far northeast Asia with northwestern North America during the Pleistocene epoch, when and how the peopling of the Americas occurred remains unresolved. Analyses of human remains from Late Pleistocene Alaska are important to resolving the timing and dispersal of these populations. The remains of two infants were recovered at Upward Sun River (USR), and have been dated to around 11.5 thousand years ago (ka). Here, by sequencing the USR1 genome to an average coverage of approximately 17 times, we show that USR1 is most closely related to Native Americans, but falls basal to all previously sequenced contemporary and ancient Native Americans. As such, USR1 represents a distinct Ancient Beringian population. Using demographic modelling, we infer that the Ancient Beringian population and ancestors of other Native Americans descended from a single founding population that initially split from East Asians around 36 ± 1.5 ka, with gene flow persisting until around 25 ± 1.1 ka.

The story is well covered in this Guardian piece by Jennifer Raff (hat tip to John Hawks) and in this more detailed story by Dr. Ben A. Potter, Ancient Beringians.The following diagram from DR Potter's piece suggests the evolution of the human population in North America. Comments follow the diagram. 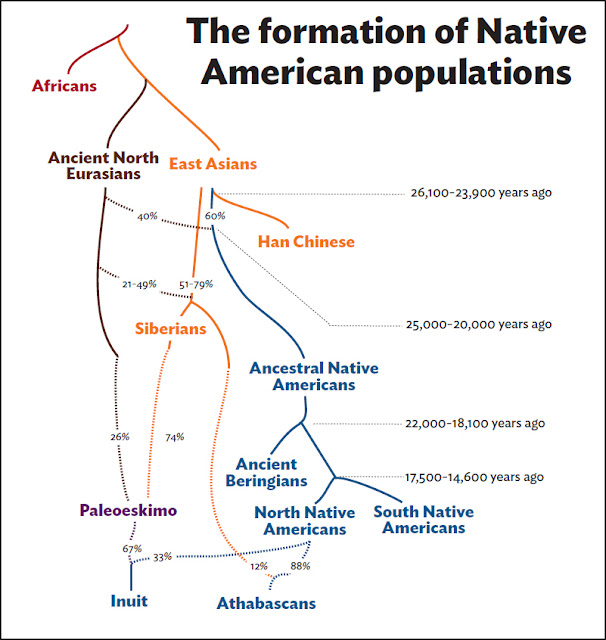 No doubt the diagram will continue to evolve as we learn more. For the moment, a few comments from an Australian perspective. .

Beringia is the name given to the land bridge that joined Asia and North America during the period of very low sea levels. This land lies north of the main glaciation during the Last Glacial Maximum. We keep coming back to the LGM don't we?!

According to Wikipedia, Beringia, like most of Siberia and all of North and Northeast China, was not glaciated because snowfall was very light.. It was a grassland steppe, including the land bridge, that stretched for hundreds of kilometres into the continents on either side. It became, in effect, a refuge area that allowed some people and animals to survive and to enter what would become North America. More and more, I think that we need to understand the possible pattern of refuge areas in Sahul (Australia) that might have facilitated human survival on this content during the LGM.

In looking at the diagram, I was struck by the short time horizons involved in the evolution of particular groups compared to the history of Aboriginal occupation of this continent.We know, I think, that the Papuans and Aborigines come from the same base, that the genetic differences between South West and North East are perhaps as great as those between Asian and European populations, that there were some specific genetic mutations that emerged in adapting to differing environments. We also know that there were considerable differences in physical appearance between differing Aboriginal groups over space. But I don't think that we understand the pattern here. Certainly I don't.

I think that it would be interesting to find that out.