The start of a new history year. May 2018 be a good year for all of us, personally and in research and writing. There is so much more to learn. At this point I haven't attempted any new year's resolutions. I may do so later. For the moment, I want to focus on one blog that I found over the break, Dr Caitlin Green's personal blog and website,. It's a blog I have really enjoyed.

Caitlin is an historian and writer whose professional interests lie in the history, archaeology, place-names and literature of late Roman and early medieval Britain. Don't let her field put you off. Even if you are not interested in her specific field, there is some good and fascinating stuff there that really spans.

Normally I would give you some examples to illustrate, a taste if you like. But this time, I want to follow through a series of linked posts over time that while in a different place are tangential to some of the discussion on this blog.

In The Welton le Wold handaxes & the earliest human activity in the Louth region (4 August 2014),  I had to look Louth up.  It's in Lincolnshire, an area that Caitlin has subjected to detailed study. The post discusses the latest dating evidence: "We therefore have, in the Welton handaxes, solid evidence that early humans were present in the Louth region around 400,000 years ago." 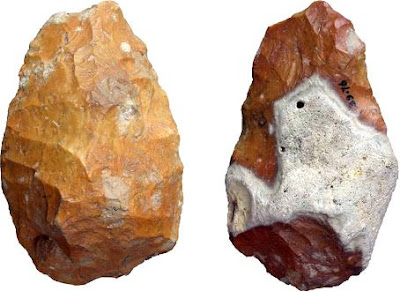 The material in question comes from Welton le Wold quarry, which lies in the Lincolnshire Wolds around three miles to the west of Louth. They consist of three flint handaxes, a worked flake, and a number of fossil animal bones and teeth. Optically Stimulated Luminescence dating of the associated gravel suggests that the handaxes and fossil bones probably originated during a temperate period, the Hoxnian Interglacial, which lasted from around 424,000–374,000 years ago.

In her post, Caitlin discusses the life of the makers and their possible relationship to other English discoveries. In doing so, she outlines some of the huge climate and landscape changes that took place over the 400,000 years since and the way they might have affected both movement and evidence.

In Australia, we have become thinking in long terms as the date of human occupation of the continent has been progressively pushed back to now around 65,000 years. The time horizons in Europe and Africa are much longer because of the variety of Hominin species involved. One of the interesting questions is the possibility that we will find evidence of earlier hominin species in Australia. This seems more likely than it did a few years ago since the Hominin occupation of what is now Asia was far more widespread and complex than was once realised.

From Welton le Wold to the end of the last glacial period, c15,000 years ago 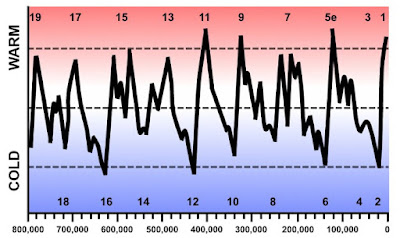 This graph from Dr Caitlin Green provides a visual indication of temperature fluctuations over the last 800,000 years. Those fluctuations had huge impacts on human life.

Caitlin continues the story in Of chalk and ice: the white cliffs of Louth in the Palaeolithic era  (24 September 2014). This traces the story from the handaxes probably used by pre- or ancestral Neanderthal hunters in the Hoxnian Interglacial around 400,000 years ago to the end of the last glacial period nearly 15,000 years ago.

The archaeological record is patchy, It appears that at 280,000 years ago there were at least occasional human visits, that around 57,000 years ago the as Neanderthal settlement and then around 35,000 years ago modern humans arrived.  The patterns reflect varying temperature patterns. The arrival of the Last Glacial Maximum effectively terminated much human settlement.

From 15,000 years ago, Caitlin's material is spread over multiple posts. I will list some of those posts in a moment, but I wanted to make some general comments first.

There is a constant battle between land and sea. The land extends itself through a process called progradation; rivers carry silt that can progressively build land through the formation of deltas. In New England, perhaps the most classic example is the lower Macleay valley where at the height of the Holocene the sea stretched inland to the site of modern Kempsey, only to be driven back to the current coastline through progradation.

For its part, the sea constantly erodes the land. Sometimes when there are big storms in combination with high tides, the sea can breach barriers reclaiming the land.

Sea levels relative to land can also change because the land itself rises or falls. Again, an extreme example is the shifts associated with the ending of the last ice age where the removal of the ice cap caused post glacial rebound. Land that had been forced down by the icecaps rose, causing land elsewhere to fall. Places that were ports, for example, find themselves inland. Places that were above water find themselves submerged. These are long term processes that continue today,

Post glacial changes are not the only factor at play, for continental shifts also affect land levels. Research suggests that as the Australian continent drifted north from Antarctica during the past 50 million years, it subsided by up to 300 metres and tilted to the north. Again, this is a long term process that continues today  It seems that the Australian continent is both moving north (1.5 metres in the last 22 years) and wriggling around as it moves.

One of the lessons all this, a lesson that Caitlin's posts with their focus on part of Lincolnshire illustrate, is that the local effects of these changes vary across the entire spectrum. You cannot simply apply generalised models without risk of error. You  actually have to analyse local conditions. This is true in general, but increases in importance as the time period under study increases.

Some of Caitlin's posts are:

A further curiosity for you Jim.
”The medieval 'New England': a forgotten Anglo-Saxon colony on the north-eastern Black Sea coast.”
http://www.caitlingreen.org/2015/05/medieval-new-england-black-sea.html.

Thanks, John. That is indeed a curiosity. I will tweet the link to Michael O'Rourke who regularly posts snippets on Byzantium history including the Guard.