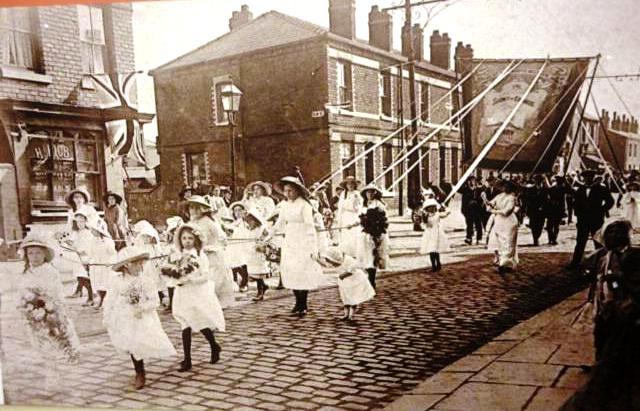 Walking Day: Platt Bridge, Wigan 1900. The annual walking days were one of the rituals of Methodist life. This is the first in a series telling the story of the Pacific Belshaws

As a break from my recent focus on the built environment, over the next few columns I will take you on a journey through the history of my part of the Belshaw family.

It’s the story of a small working class family that through education, work and a degree of happenstance became an intellectual/academic family that had at least some minor impact on intellectual and academic life in four countries and, to a degree, beyond.

It is also the story of the way similar passions and interests pass through generations in different countries.

In subject terms these interests include, history, economics, anthropology and archaeology.

Recurring issues over more than 100 years of family history include economics, rural and regional development, Indigenous advancement, social justice and a belief that improvement is possible.

We can begin our story 151 years ago with the birth of my grandfather James Belshaw in Wigan, Lancashire, on February 7 1867.

Wigan and its suburbs including Ince and Platt Bridge are “Belshaw Central”.

Wigan with its coal mines, new canals and textile mills had been expanding rapidly as the industrial revolution spread.

James left school early to become a miner, the third generation to do so.

James had at least some education, later supplemented by reading and especially the bible.

By contrast, my great grandparents’ wedding certificate shows bride, groom and the two witnesses all signing with a cross, implying that they were illiterate. This was not unusual.

When my father visited England in 1936, his father’s older sister Ellen apologised that she had not kept in touch, explaining that she could not write.

In 1897, James Belshaw married Mary Pilkington who had been working in the mills. In 1898 their first child, Horace, was born followed by Olive in 1899. Olive died two years later, but then in 1804 a third child, May, was born.

My grandfather seems to have been determined to better himself. He set up as a greengrocer, then worked as an insurance salesman and then again as a coal miner.

He and his wife were devout members of the Primitive Methodist Church.

He was also politically active, running in 1905 as a candidate for the newly formed Labour Party in the Abram Council elections. “I am one of you, a local and working man,” he explained in his campaign pamphlet.

That same year James decided to emigrate to New Zealand. That decision led to the establishment of the Pacific Belshaws.